Home NBA Ahmad Rashad: Inside The NBA Host Was The King of Cool 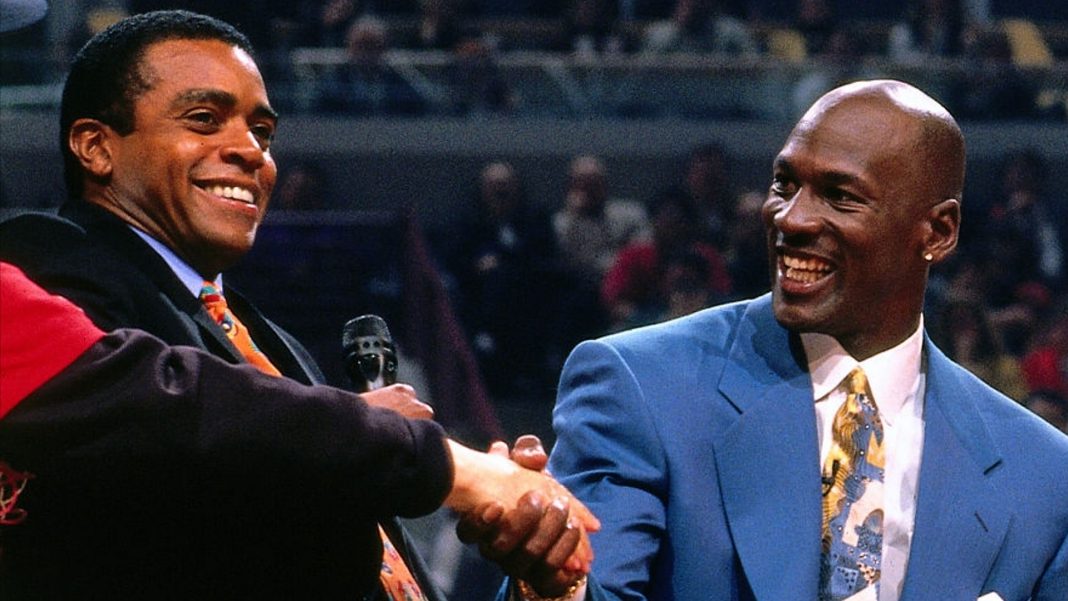 After watching the entire docuseries of “The Last Dance”, I realized it was not just Michael Jordan, Scottie Pippen, and Dennis Rodman who were portrayed as winners. Sure, the Bulls were the greatest dynasty of the 90’s winning 6 titles in 8 years, filled with tons of drama, ups, downs, and champagne bottles popped. But there was one person in the documentary that needs to get his own docuseries, and that’s Ahmad Rashad. Rashad has had one of the more interesting television and sports careers of all-time. Many do not know about his days in the NFL. Rashad was an All-Pro, Pro-Bowl wide-out for the Minnesota Vikings from 1976-1982. Ahmad also appeared in an NBA game, although it was a preseason game, Rashad suited up for the Philadelphia 76ers in 1990 and got buckets! Ahmad has been around in the NBA for over 30 years. He was the host of “NBA Inside Stuff’ from 1990-2004 and “NBA Access with Ahmad Rashad” from 2005-2011. Rashad still does what he can to contribute to basketball by acting in basketball movies, shows, and even appearing on TNT’s “Inside the NBA”.

Rashad has the personality and aura that can light up a room, his positivity and charisma caught the attention of everyone including Michael Jordan. Jordan and Rashad built a tight knit bond over the years during MJ’s tenure with the Bulls. Ahmad was known as “Michael’s Main Man” for all the 1 on 1 interviews and stories that Jordan shared with him. One of Rashad’s more famous interviews is during the 1993 Eastern Conference Finals, the Bulls are down 2-0, and Michael was caught in Atlantic City gambling with his father until the late hours of night. This caused outrage and controversy, many of the media deemed Michael as a heavy gambler and did not take playing basketball seriously especially after being down 2 games to none. Michael calls up Ahmad Rashad for an emergency sit down interview to clear the air on his gambling stint. The only person Jordan trusted with this interview was Rashad. As the interview proceeded, Jordan infamously did not take his sunglasses off, Jordan clears the air on his “competitiveness problem” and Rashad to this day can recall every minute of that sit-down. Recently Ahmad joined in on Ernie Johnson and Charles Barkley podcast “The Steam Room” to talk about the relationship he has with Michael throughout the 90’s and during the final season of the Bulls Dynasty and what Jordan so polarizing.

During the Podcast, Rashad mentions how he knew Michael was going to be special and how they really met. During 1983 when Jordan was playing for North Carolina, John McEnroe, legendary tennis player told Rashad to keep an eye out for this kid. “He kept telling me you gotta watch this guy [Michael Jordan] at North Carolina.” Ahmad says. Fast forward to 1990 during Magic Johnson’s Mid Summer’s Night Charity Game, Rashad met Michael then, exchanged phone numbers, and became extremely close during the years. No matter the situation, win or lose, Rashad could get the last word out of the Michael Jordan. Many such as Charles Barkley had similar relationships with Ahmad, during the pod, Barkley brings up the cigar story, when Michael, Charles, and Ahmad used to golf and smoke together but Barkley had no idea between the qualities of cigars. Ahmad yells out “Chuck if you’re going be a cigar smoker you need two different sets, one for the riff raff, and the special cigars for the people who know what the hell you’re doing.” Barkley thought the hundred dollar a piece cigars were basic Swisher Sweets. Comical.

I don’t think there is anyone cooler in the sports journalism industry than Ahmad Rashad. Playing at the highest level in his respective sport, and reporting at the peak of the NBA’s Golden Era. Earning not just the respect of the NBA but the admiration he receives from everyone is truly amazing. We need more Ahmad Rashad’s in the world, his positivity and ability to build relationships is nearly 1 of 1.