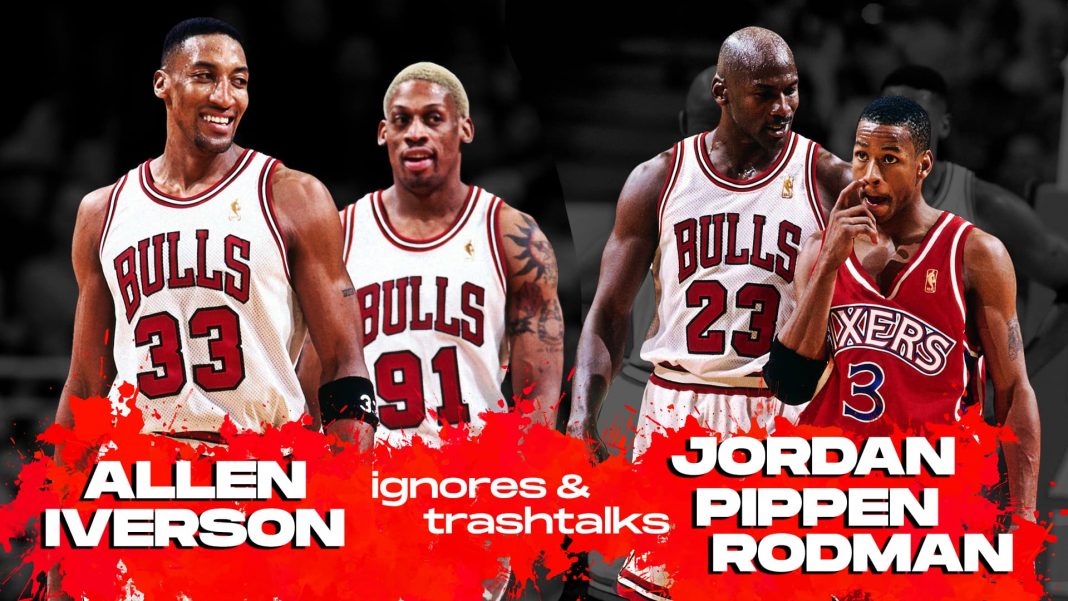 First, we have to look at AI’s arrival and the league’s state in 1996.

Allen Iverson didn’t lack any confidence or credentials, and he was in the vanguard of the new NBA movement, which was a return to quick, small, offensive-minded point guards.

He had become such a phenomenon the league was monitoring his explosive crossover dribble to determine whether it is illegal. It was just another attempt to bring him down. He was using it for his entire life. Referees began calling travel the crossover at that time. Because it was brand new, and they were not customed to seeing it.

He had a tattoo on his left arm named The Answer, it was his only tattoo at that time. In those years, the NBA was trying to get used to the antics of Allen Iverson and Dennis Rodman.

The game never saw anything like AI since Nate Archibald and Calvin Murphy in the ’70s. He was the most exciting rookie to enter the league since Shaq.

When he faced the Bulls, he clearly ignored it, rudely, when his team dropped by the United Center in early November 1996, and with that created the undercurrent that cut through the December game.

In the first game in Chicago, also, it was his second game as a pro, he not only showed no regard for his elders, he blithely cursed them with the most unprintable of epithets.

First, Ron Harper’s defense frustrated the rookie. Then when he turned the ball over in the last seconds of the quarter, Randy Brown trash talked him, “Nice Job Kid.” All of those turned Iverson mad. In the free-throw break, he started to talk smack at Ron Harper.

At one point, Michael Jordan walked over to try to cool Iverson down,

Iverson roared: “GET THE F**K OUT OF MY WAY.” adding few profanities for good measure.

Jordan said, “You gotta respect everyone.” and merely rolled his eyes and walked away.

AI continued, “I’ve no respect for anybody.”

Jordan said after the game, “I was talking to Chief (Robert Parish) I said I could never tell Larry Bird or KC Jones some of the things he’s done thus far.”

Dennis Rodman said, “Iverson came in there thinking he was Jumanji and was going to control the whole forest and wilderness. One of us will have to flatten him on his butt.”

You knew round two was coming in the December game. Not only Rodman and Pippen did full-court press on him at the first game, now they were motivated for the second game.

Iverson was subjected to a vicious verbal hazing by Scottie Pippen and Dennis Rodman. Both touched on a common theme, namely Iverson’s aversion to passing that sometimes borders on a phobia.

Rodman razzed him at one point in that first meeting: “YOU SHOOT TOO MUCH.”

Those zingers and a slew of unprintable others had Iverson boiling.

Iverson, through the first half of this night (December) did manage to keep those words to himself, scoring 20 points. But then as the bulls worked him over, he was just a rookie. He was baited by Harper by Dennis Rodman, who, after getting fouled by Iverson, patted him on the butt.

“DON’T TOUCH MY BUTT,” Iverson snapped as he ran up the court.

And Rodman with a smile. But as he passed Iverson on his own way up the court, he patted him there again.

Two points. That is all Iverson would score in the last 16 minutes of the game. 5 turnovers.

Iverson was undone, unhinged now, and in this one’s last 3:23 he committed three of his turnovers and rushed Rodman after Rodman inadvertently grazed him while collecting a late rebound. Probably this kid (6-minute 13-second mark) with the 90s polaroid camera has the best moment In his vault.

Rodman said, “Just wanted him to come in the lane so I could hit him. I didn’t want to hurt him. But wanted to make him sure that he knew. You gotta respect the game and the players you play against. He thinks he’s G-O-D God. He thinks the court is his street, his playground. It’s very sad.”

Besides the trash-talking action, the night was an Iverson and Jordan showdown. Jordan’s slam dunk with 4 minutes left in half and Iverson immediately followed with a jumper of his own, glancing over Jordan. But the best moment of the whole game happened without a conclusion. With 2:35 left Allen Iverson caught Michael Jordan 1-on-1. The crowd began to cheer, thinking something great to happen. The Bulls, however, called for illegal defense, the crowd booed.

And Jordan still praised ıverson at the end game after all the disrespect.