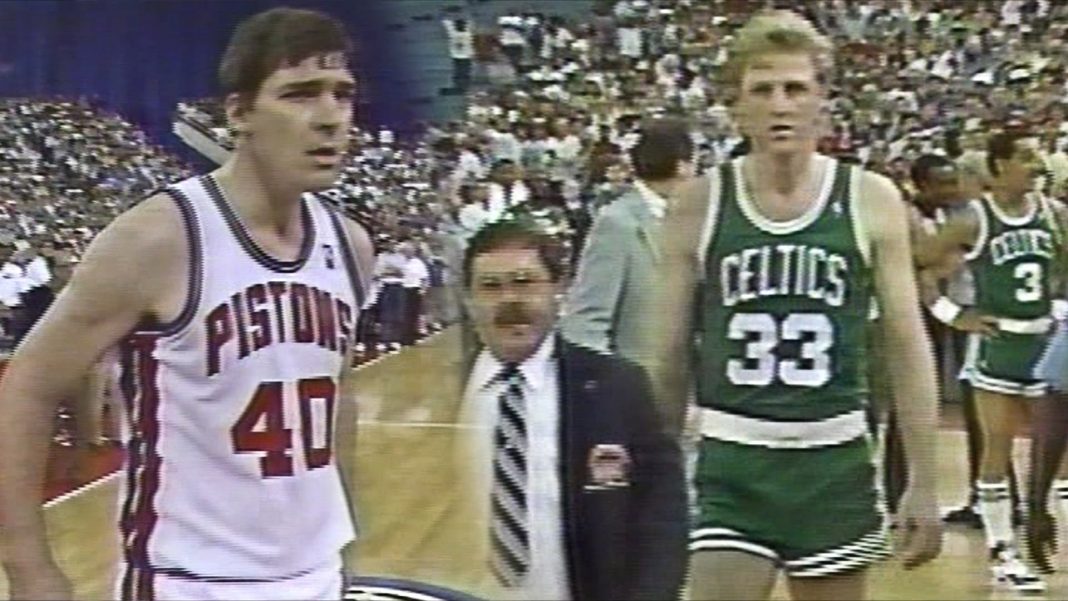 The game Larry Bird and Bill Laimbeer went at it. Seeing Larry Legend go full berserk is rare. You have to take him to the limit to see that. It’s pure ’80s basketball, the most entertaining and the most fun to watch.

BIRD HAD ENOUGH WITH LAIMBEER

Just as the 24-second shot clock expired, Bird, driving for the basket, was pulled down from behind by Laimbeer and thrown hard to the floor. Larry, who came up with welts on his neck and face, began flailing away at Laimbeer. Both benches were cleared.

Everything got more exciting after the huddle. A rarely pissed off Larry Bird threw the basketball at Laimbeer, ended up hitting him. Rodman came into the action as Laimbeer’s “Buddyguard”. Isiah Thomas was holding Larry Bird and laughing hard like a psycho.

”It`s like MJ said, he’s the dirtiest player in the league, everyone knows it,” said Bird. Laimbeer played the nice guy in post-game: “I didn’t do anything wrong. He came up swinging. My reputation victimized me. I didn’t do anything to deserve being kicked out of the game.”

$ 7K FINES FOR THE INCIDENT

Laimbeer fined $5,000, Bird fined $2,000 and they moved on to the next game as nothing happened. (But next game, late in the 4th quarter, Robert Parish smacked Laimbeer to the face at Boston Garden and got Bird’s revenge.)

Also in an interview with Bill Simmons, Bird said he had no respect for Bill Laimbeer as a player and all his antics. Here’s the vid.

Larry Bird and Bill Laimbeer’s incident was in game 3. In the game 4 Parish smacked Laimbeer to the face and both not ejected, and finished game like nothing happened. Then in game 5, Celtics beat Pistons with the famous steal by Bird. Isiah Thomas did a game-winner shot, then turn over the ball, and Boston Celtics went to 1987 NBA Finals.

Legendary Boston Celtics play-by-play announcer Johnny Most with famous lines: “Now there’s a steal by Bird! Underneath to DJ! He lays it up and in!! … What a play by Bird! Bird stole the inbounding pass, layed it up to DJ, and DJ layed it up and in, and Boston has a one-point lead with one second left! OH, MY, THIS PLACE IS GOING CRAZY!!!”