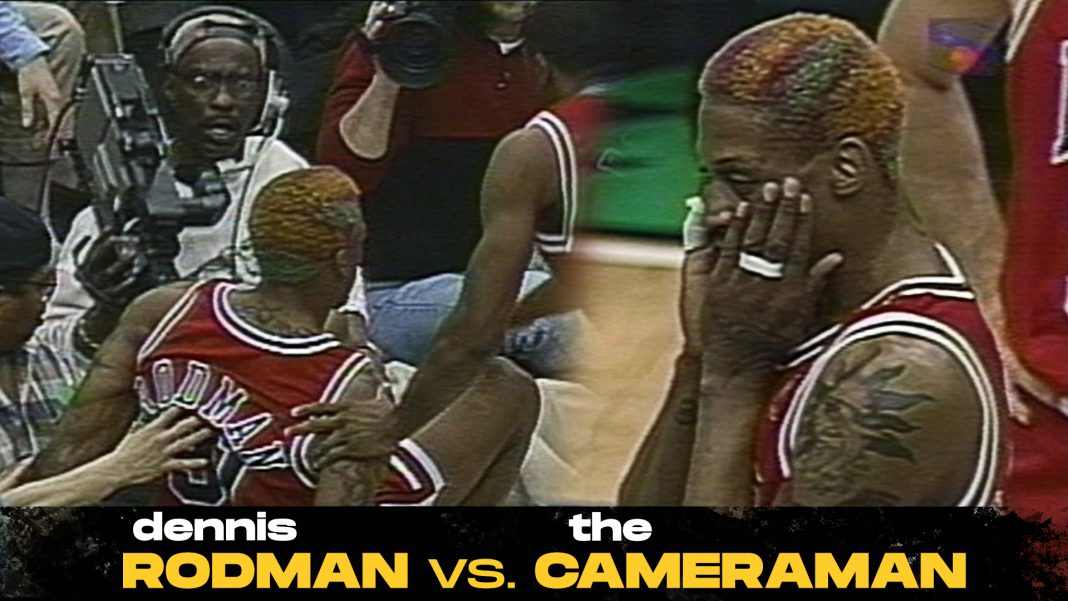 Supposed to be a pedal to the medal routine for Chicago Bulls because they beat Minnesota 16 times since the Timberwolves joined the NBA in 1989. But this 17th victory was quite different than the others. Why? Because Dennis Rodman had a bizarre incident in front of 20 thousand people at the Target Center, he was deemed to grab a rebound in the 3rd quarter.

The story of the game supposed to be like this, Jordan, who had a sore neck, was in obvious pain every time he scored his 25 points, passing Alex English for 8th place in the all-time points list. Michael missed the shootaround because of his neck, but he wanted to play the game. He didn’t sit on the bench because he experienced more pain while sitting.

Scottie Pippen was saving the Bulls in the second half. 17 of his 29 points came during Bulls 33-10 run. Young Stephon Marbury and Kevin Garnett learning the lesson Bulls gave it to them.

It cannot go smoothly like that because Dennis is on the court. There he is, the Worm is in trouble again. He battled Tom Gugliotta for a rebound, but couldn’t catch the ball, fell over a photographer while he was stumbling out of bounds. Rodman kicked the photographer for his frustration. “Where there’s a controversy, I’m always in the middle of it.” said after the game.

Johnny Red Kerr from SportsChannel broadcast team immediately said, “Rodman was really upset. You almost see the dollar bills floating around in there.” His partner Tom Dore, “Can someone go over and help this guy get up or something? This is a joke.”

The courtside Cameraman Rodman kicked, his name was Eugene Amos. He was taken to an area hospital on a stretcher after complaining of the groin, back, and neck problems. He was listed in stable condition. At the hospital, a man who identified himself as a cousin of Eugene Amos tried to sell Amos’ story to the media. After being told media don’t pay for the news, he said Amos intends to contact a lawyer about the incident.

Those years Dennis Rodman wanted to be a movie star and made a film with Jean Claude Van Damme. In fact, the Cameraman’s acting job was the worst than Rodman’s acting because Amos was motionless for seven minutes before taking out the hospital. Most of the media agreed Rodman was wrong to kick Amos but believed Amos overreacted and that the camera crews were too close on the court.

The camera people are close to the baseline. Any athlete would react the same way after a frustration. And Rodman stepped on camera and almost twisted his ankle.

And NBA kicked back. Rodman suspended for at least 11 games. It was the league office’s hardest punishment since the late ’70s Kermit Washington scandal. Also, they fined Rodman for $25,000. David Stern said, “Until Dennis can provide meaningful assurances that he will conform his conduct on the playing court to acceptable standards-including not placing others at physical risk- his suspension will continue.” Rodman’s salary was about 9 million, and the losses could top 1 million. Most expensive suspension of his career.

When Rodman was back after his suspension, fans held cards like “Be like Rodman, kick some butt!” They rushed to their fallen hero’s defense. No matter what Dennis Rodman did, no matter what he said or wore, Chicago fans accepted him unconditionally.