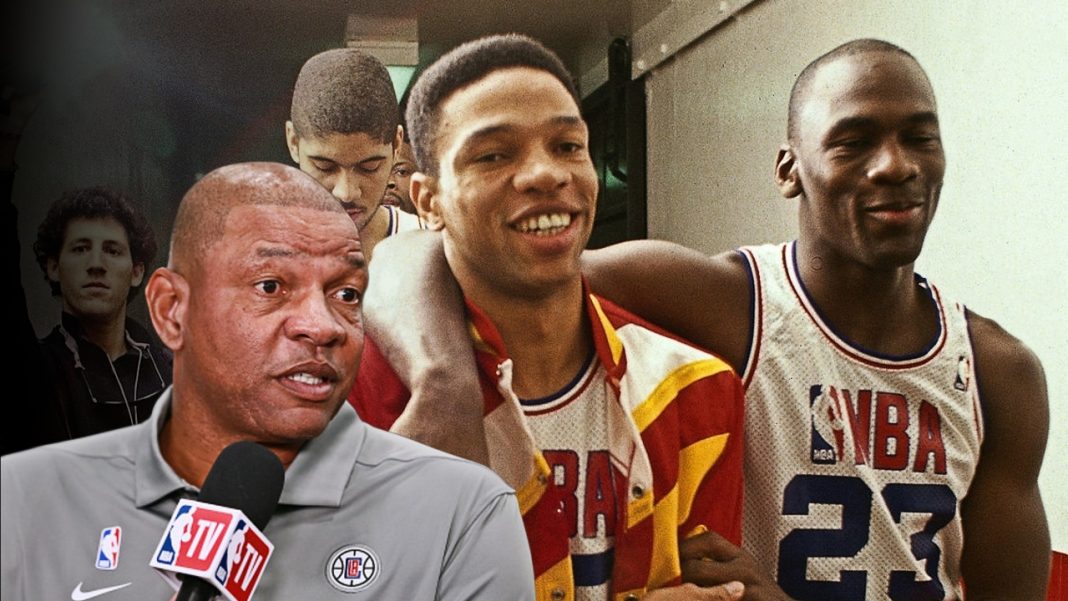 As a defender, when you faced Michael Jordan, you knew what to expect. All eyes are on Michael, every move he makes, and every step he takes has a purpose. Whether it was a purpose to score, assist, rebound, make a defensive play, or to absolutely demoralize the opposition, the defender had to make sure he had a career night guarding Air Jordan. One defender who went head to head with Jordan quite frequently was Clippers Coach Doc Rivers. Doc Rivers was a guard who had the pleasure to guard Mike in his Prime. Rivers played for the Atlanta Hawks, L.A. Clippers, New York Knicks, and San Antonio Spurs throughout his career and recalls one story that really stood out to the rest of them.

On ESPN’s “Hoop Streams,” Doc mentioned how competitive MJ was from the Jump. When Rivers was playing for the Hawks, and he was the primary defender on Jordan. Rivers was talking about how Michael had an off night on the first round of a back to back. “I think we held him … not to his career-low, but he had a tough night against us”. Jordan did not take that lightly, and with Michael, he always had his subtle ways of letting his opponent know, you might have won the battle, but the war ain’t over. After this particular off night, Jordan went into the Hawks locker room as Doc mentions and goes, “He did walk into our locker room and just to alert us… I just want to let you all know good luck tomorrow.” Uh Oh. Doc and the rest of the Hawks knew they were in some deep trouble when Michael blurts out a message like that. “I can’t wait to see you all tomorrow.” Weird. A somewhat friendly thing a competitor would say to his opponent turns into an act of basketball torture. Jordan went off the following night, and everybody on the Hawks felt his wrath. The mental approach to Michael’s game had the league noticing, and it was crazy to see what Michael does when he puts his mind to something. Off night one game, torching the Hawks the next.

It didn’t stop there for Doc Rivers either. In the ’92 season, he signed with the New York Knicks, and once again, the battles between Rivers and MJ continued, but with more physical play. Doc told Kendrick Perkins of ESPN, “As you can see from a young age, they taught us when someone stands in your way while driving, lift that leg up.” Referring to his knee to Jordan’s midsection during the 1993 Playoffs that sent MJ crashing to the ground. You had to do anything and everything to stop Jordan. Yet, many such as Doc could not stop MJ but hope to contain him.

Rivers was one of many peers who went up against Jordan constantly. Doc wasn’t the first to get lit up, and damn sure wasn’t the last. Stories told by Rivers and many others are what solidify legends such as Michael Jeffrey Jordan.