HomeNBAGary Payton, his Impeccable Defense and the Art of Trash-Talk
NBA 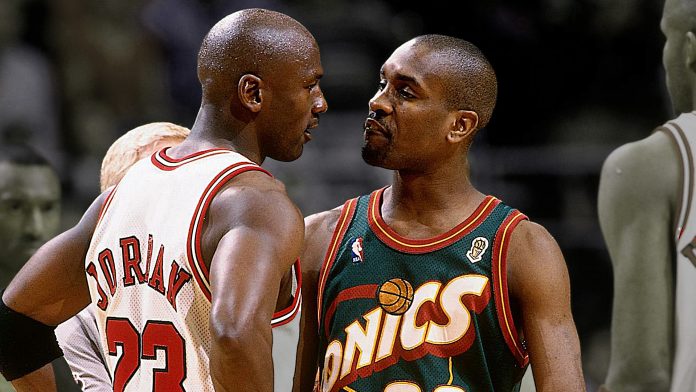 Not today, but trash-talk back then was an art form in the NBA. The list goes on and on: Gary Payton, Reggie Miller, Vernon Maxwell, Xavier McDaniel. Trash-talkers of the 90s NBA had better be able to take it to the hoop and shoot from the lip. GP, “The Glove,” is an Mt. Rushmore trash-talker. His scoring is still overlooked because his talking game apexed every time he was on the basketball floor.

He was a dynamic point guard averaging over 20 points a game for most of his Seattle Supersonics career. He was more than just lob passes to Shawn Kemp and making difficult circus shots. GP had an excellent post-game for a point guard. Payton developed a jump shot and was a good rebounder for a guard. He dominated in the challenging ’90s era, and famously he could break opponents with his trash talking. Until Marcus Smart in 2022, he was the only point guard to win the Defensive Player of the Year award. GP, at 6-foot-3, could lock down the best of them. The number of players who would talk or get in Michael Jordan’s face during his heyday, you can count on one hand. GP was one of them.

Trash-talking is a distraction. It’s someone trying to break down your concentration—all part of the show. Any sports activity requires specific mental preparation. If you can not out-do someone physically, you try to break them down mentally. A good move was not enough for Gary Payton. He wanted to rub in. Glove’s trash talk was designed to disrupt his opponent’s game, knock them out of sync, and frustrate them. He was out there to get any advantage he could.

The actual test of trash talking is backing it up. That’s why Gary Payton, who retired in 2007 still one of the greatest ever to do it. He could constantly talk about everything and keep his opponents on edge because they never knew what he might do.

Ray Allen was more than a 3-point shooter. He was an...