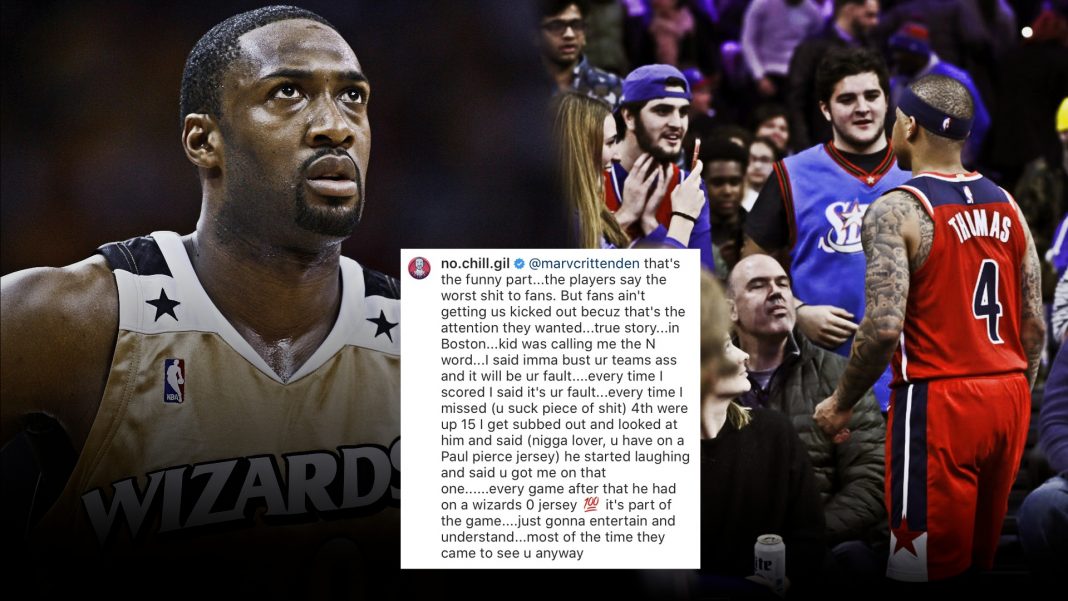 Gilbert Arenas shared his own thoughts about Isaiah Thomas entering the crowd for confrontation with an Instagram comment (later he deleted it), found IT vs. Heckler back and forth ‘goofy’. And he shared his own story with a Boston Celtics fan back in his playing days.

Thomas later in the post-game interview said that he felt he got disrespected by the heckler because the fan yelled at him, ‘Fuck you, b–h’ three times. Then Thomas goes directly to the fan and hears, ‘ I’m sorry, I just wanted a frosty ’. That is the entire incident.

NO MORE ‘MALICE AT THE PALACE’

Thomas has been suspended two games for entering the crowd during a verbal confrontation with fans Saturday night in Philadelphia. In today’s NBA, there are some lines that you cannot pass. You can’t walk from the bench to the court or go to the crowd. Whether you fight or talk to a fan for a chat, a player going into the stand to yell/confront fans crosses that line. The league experienced the situation at it’s finest in 2004 with infamous ‘Malice at The Palace’. You cannot do anything that comes close to the ‘Malice’ regardless of what the heckler did to Isaiah Thomas. That is just the way things go. Players get held to a higher standard.

AGENT ZERO IS FROM A DIFFERENT CLOTH

Arenas’ point is that you should not care about what the heckler or the entire crowd says to you. He says you should go and basically ‘kill’ the opponent team and that should be your answer. He shared his own story with a heckler from Boston back in his playing time to clear out the situation:

In Boston, kid was calling me the N word…I said imma bust your teams ass and it will be ur fault. Every time I scored I said it’s ur fault…every time I missed (u suck piece of shit) 4th were up 15 I get subbed out and looked at him and said (n***a lover, u have on a Paul Pierce jersey) he started laughing and said u got me on that one. Every game after that he had on a wizards 0 jersey. It’s part of the game…just gonna’ entertain and understand…most of the time they came to see u anyway.

Gilbert Arenas shares his story with a heckler from Boston

To compare Gilbert Arenas and Isaiah Thomas, it is really depending on the mentality. NBA is more player-focused these days and the players are getting sensitive and protected over the years. Arenas, Kobe or other highly competitive NBA players in the past, they’re the last dying breed. You have to be from the same cloth to do that. They just go for the ‘kill’ no matter what.