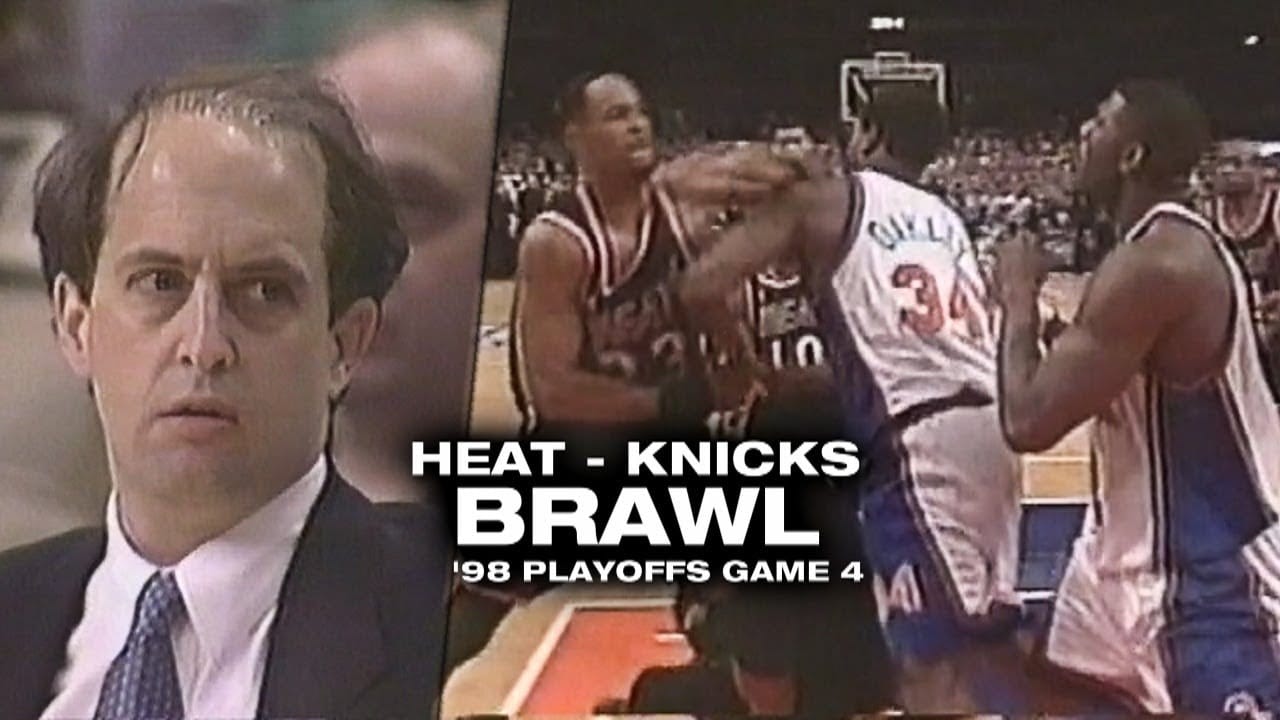 Remember Heat and Knicks brawl in game 4 of the 1998 NBA Playoffs?

HEAT-KNICKS RIVALRY at its peak. Alonzo Mourning and Larry Johnson’s so-called “fistfight” cost them $30K and they did not even land a single punch at each other that night. New York Knicks coach Jeff Van Gundy is trying to break up the melee but ending up mopping the floor, Charles Oakley takes him away from the action and laughs at him for getting into the fight. While he’s choking Alonzo Mourning so he can break up the fight. Probably the worst from the fighting standpoint but the most exciting NBA brawl ever because it has happened in the Mecca, Madison Square Garden. Where the Ali-Frazier I-II happened.

I posted the whole action on my YouTube channel that I collected in a tape featuring 60fps and high-quality footage:

A year before, PJ Brown did a WWE move on Charlie Ward and sent him to photographers section during the free throw shot. Whole bench went to the court and cost Knicks team a playoff run, maybe a finals run in ’97 playoffs.

That time Zo and LJ was the main attention. They were teammates in Charlotte but never liked each other. They had problems since college days. Larry Johnson was the NBA rookie of the year in 1990 and rewarded with $84 million contract. But Mourning emerged as the leader of the Charlotte Hornets. They always had tension.

In the play, Larry Johnson boxed out too aggressively and connected an elbow to Alonzo Mourning’s head. And Zo was just stopped using a facemask because of an injury cost him a fractured left cheek. Mourning threw a one-two combination. Larry Johnson retaliated. Then the whole mess. Zo was calling Johnson as “Punk”.

HEAT-KNICKS RIVALRY started when Van Gundy became Knicks coach and Pat Riley (his boss in New York) to Miami Heat. And it continuted until 2000. Their battles in 1997,1998 and 1999 were remarkable and joy to watch. But both teams ran into the Michael Jordan era, unfortunately.

And this was not even the biggest suspension of that season. Thanks to Latrell Sprewell who choked and punched his own coach P.J. Carlesimo during a Golden State Warriors Practice in December 1997. He couldn’t play a season. The longest non-drug-related suspension in league history. Sprewell $6.4 million in lost salary.

1997-98 was an eventful season. All the fights and suspensions, Jordan’s last championship run with the Bulls. But more importantly all these suspensions: There have been 16 incidents of on-court fights, flagrant fouls or physical altercations that led to a total of 27 games lost because of suspension and $171,000 in fines. There were 13 incidents, involving 19 games lost to suspension and $144,500 in fines.