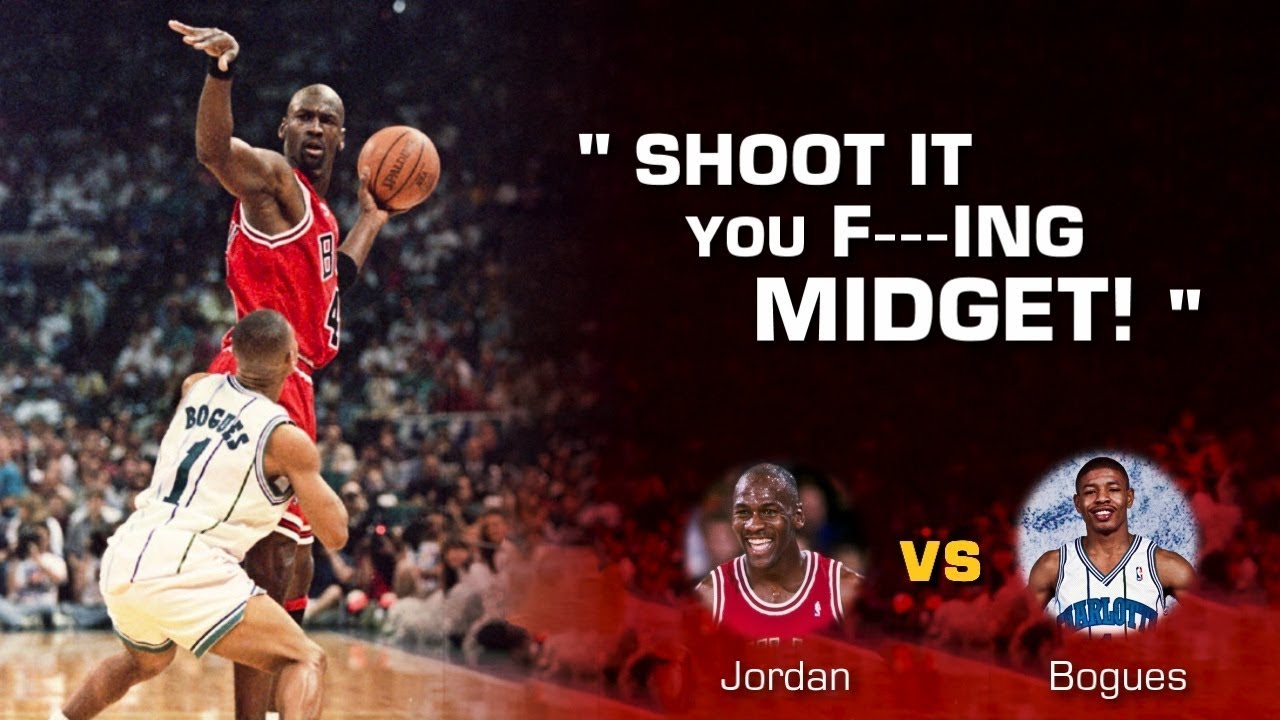 Muggsy is checking MJ! Every NBA fanatic knows this photograph. Now I’ll show you the exact moment that photo was taken, Michael Jordan and Muggsy Bogues:

First Bogues misses a jump shot and hustles through Pippen who got the rebound, almost steals the ball from him. Then in a transition, the unexpected mismatch happens…

5 foot 3-inch Muggsy Bogues guards Michael Jordan and almost steals the ball. It’s almost a heroic moment both for Bogues and The Hornets.

I was watching the 1995 playoffs series between Bulls and Hornets and this doubtful story came up to my mind:

The story about MJ ruining Muggsy’s career by calling him a midget, which is unlikely true…

They say Michael Jordan ruined Muggsy Bogues’ career by telling him to shoot the ball during a big moment in the 1995 playoffs while calling Muggsy a midget. The rumor is that this exact sentence ruined Muggsy’s career. Although this sounds like a good story about how ruthless MJ used to be, the facts don’t seem to support it.

Let’s sink this myth and destroy this rumor which shared and talked about by the biggest sports networks like Espn, Bleacher Report, Complex and so on…

According to these articles, Muggsy had the ball, during the game’s most important possession, during game 5 of the first round 1995 playoff series, MJ backed off of Muggsy, and then shouted to Muggsy to ‘Shoot it, you f***ing midget.’

Let’s watch the tapes… don’t forget that I watched all the games in this series and find a possible scene that proves this story.

I find only one scenario may include this story. And it’s from Game 4 of the series.

The game is tied 76-76 and more than 4 1/2 minutes left. The shot that Muggsy took was not the game’s most important shot nor was it taken in the closing seconds. He was not even in the game for the final 4 minutes…

He got the ball, made quick dribble and pulled up. There was no one versus one moment. If you look at it, everything happens so quickly and you’d be surprised if Jordan even had time to say something to him. No time for MJ backing off and shouting at Bogues.

Articles are saying game 5, they don’t even make research. The moment I picked is from game 4 which the Bulls won. And this moment did not ruin Muggsy’s career. Next season, he played only 6 games because of his knee injury. He couldn’t get on the court, he was in the injury list entire year.

The story does not match up with the video footage and the idea that this somehow ruined Muggsy’s career is untrue. Muggsy’s decline was likely since he was past the prime of his career and had a terrible knee injury that kept him out for the entire year after 1995. He started to play fewer minutes and father time got the better of him.

And also Muggsy is 5 foot 3, he was probably called midget from every player in the NBA.

This Jordan legend is solved. Myth is busted!

Stories May Interest You: Michael Jordan vs. Chris Childs Incident