Home NBA How the 2001 NBA Season was Won 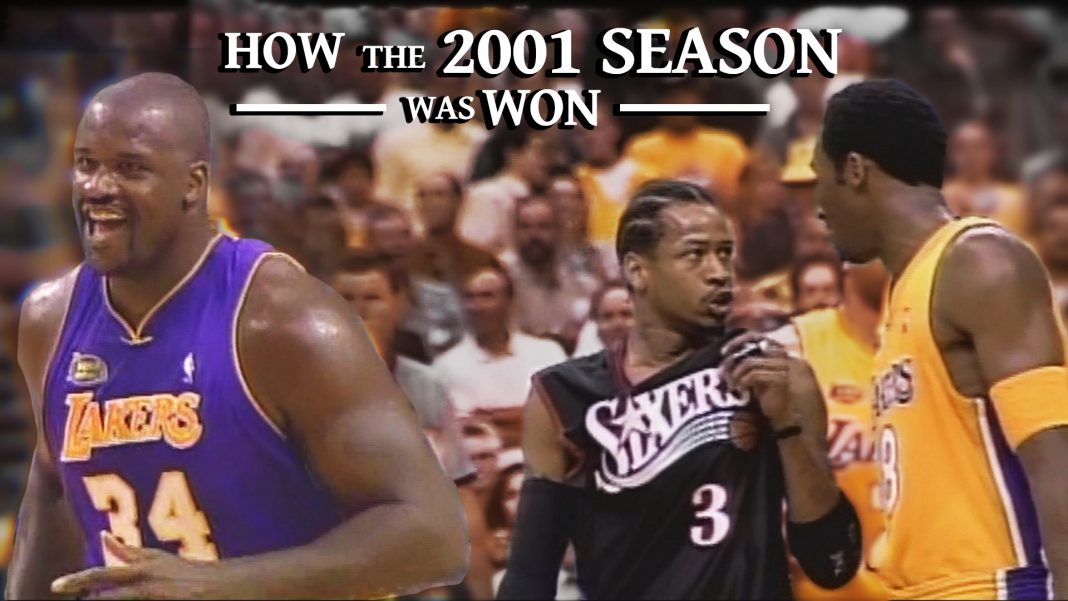 The 2000-2001 NBA season was one for the books. It was one of the most competitive regular seasons of all-time as well, no team reached 60+ wins in either conference, and the All-Star Game was a hard-fought battle, after the East led by Allen Iverson who took home the All-Star Game’s MVP, rallied down 21 points in the 4th quarter.

Iverson was always special, but in 2001 he left an imprint on the league forever. He did it all for a Sixers team that was defensive minded, leading the league in scoring at 31.1 ppg and Steals per game at 2.5.

Iverson was more than just hungry he was starving at a chance to play for an NBA championship. Philadelphia clinched the number 1 seed in the east at 56-26, and there was not a single player in the league was more valuable than the Answer and boy, was he a problem for every opposing team.

It felt like the entire season belonged to Iverson, the praise from his peers, coaches, and of course fans made him the face of NBA, Iverson was so impactful to the game of basketball that he even overshadowed the reigning champs, the Los Angeles Lakers, led by Kobe Bryant and Shaquille O’Neal. The Lakers were not only overshadowed by Iverson’s MVP run, but also by the San Antonio Spurs, who eventually clinched the number 1 seed in the Western Conference. How can you look past the champs? How can you look past the big three of Phil Jackson, the Former MVP Shaquille O’Neal, and the next great superstar in Kobe Bryant?

Although the Lakers got the number 2 seed, Shaq and Kobe were damn near unstoppable. Both averaging over 28 ppg, dunking on everything and anything in their way.

With Allen Iverson taking home the league’s Most Valuable Player award for the 2001 regular season, it seemed like this was the year Philadelphia would be able to win it all, especially with the Lakers not having home court advantage during the Western Conference Finals if they play San Antonio. Seems like it could happen right?

Not because Philly did not hold up their end of the bargain, The Sixers fought their way into the Finals, after beating Indiana 3 games to 1, Iverson’s squad battled in back to back 7 game series with Vince Carter’s Toronto Raptors, and Ray Allen’s Milwaukee Bucks’ Both were grueling series’ that took the most out of Iverson. With Philly making their first finals appearance since 1983, the entire city of Brotherly Love was inspired. The Ultimate underdogs, gritty and forceful like Mutombo on the defensive end. The 76ers would not back down from a challenge.

On the other hand, in the west there was no competition, at least for the Los Angeles Lakers that is. The Lakers went on one of the most historical runs in NBA Postseason history. Sweeping the first three rounds and dominating on both ends of the court. Kobe and Shaq looked and were damn near unstoppable. Winning their first 11 games, and crushing the number 1 seed San Antonio Spurs in the Western Conference Finals. It was the fire that burned internally with LA. After winning in 2000, many thought the Lakers could be figured out. But that was not the case, especially with repeating in their grasp. Phil Jackson relied on Kobe and Shaq to essentially attack on almost every possession while running sets of the triangle offense. The Duo cruised, and once again looked like the title favorites.

With the Finals set, it seemed as if the Philadelphia 76ers should have prayed for any other opponent than the Los Angeles Lakers. The Lakers have every single thing going for them, home court advantage, the championship experience, Kobe, Shaq, a solid supporting cast, and the Zen Master coaching. If you did not bet on the Lakers to win convincingly you were looked at funny. Many predicted a sweep, but there was one thing, that nobody could ever question going into the series, and that was the heart and will of the MVP, Allen Iverson.

How would this series play out? How would David Slay Goliath? How would a team not known for their offensive fire power keep up with the juggernaut of the Lakers?

Headlines on the LA times focusing strictly on how unstoppable Shaq is, “Stopping O’Neal Will be the Key – and Good Luck.” The Lakers on the other hand were focused at the task at hand, win 4 games, and not be looking ahead to a sweep. As J.A. Adande wrote, Iverson “learned” how to become a leader in the 2000-2001 season, learned how to become a true professional, and he (Iverson) took that and ran with it all the way to the Finals. With the headlines out of the way, it was time for the game.

Game 1, June 5th, 2001, Staples Center, rockin and rollin, the celebs are out to watch their stars shine brightest on the biggest stage. Little do the celebrities and fans know, that the Lakers are in for a wild opening game.

As the game began and both teams were set for tip-off, the electricity of the Finals filled Staples Center. It was a tough fought first quarter, Iverson led the way in scoring with 12 points, now it was off of 13 shot attempts but it seemed as nobody else on the Sixers wanted to take shots. Nerves seemed to kick in for Iverson’s teammates, but on the contrary the Lakers were not firing on all cylinders either. Kobe was struggling going 1 of 4, Shaq had 7, and Rick Fox led the charge for LA with 10. Despite the Lakers not playing up to par, Los Angeles closed out the first quarter, 23-22.

There is one thing you can not measure and count out. That one thing is Heart. With the Sixers up two, they relied on the two things that got them into this position, getting the ball to their star, and playing absolute lock down defense.

The fourth quarter felt like the longest quarter ever, both teams literally used every offensive possession as if it was their last. Both teams struggling to get a bucket, with the score at 81-80 9:48 left to go, the Lakers and the Sixers were exchanging blows on defense, forcing bad shots, shot clock violations, turnovers, it was a game that had to be won in the trenches.

94-94. what a battle between these two hungry squads.
In Overtime, It seemed as the Lakers had it once again, taking a commanding 5 point lead after Shaq and Kobe both scored, 99-94 LA. With 2:20 left to play, Iverson still has not scored since the early 4th, and Raja Bell makes a short shot, lead within one possession. Shaq misses from near point blank, and the Sixers gather the rebound, and with Iverson poised to lead the rally, he gets to the line after Tyrone Lue fouls him, makes both at the stripe, it is now a 1 point game. Every time the Lakers think they have the Sixers where they want them, the dog in Philly never stops barking. Scratching and clawing their way back in this battle.

With the Sixers down 1, with a little over a minute to go, Allen Iverson made one of the most iconic plays we have ever seen in NBA history, Iverson gets the ball isolated in the corner, Tyrone Lue draped all over him, Iverson jab steps, now to remind you, Iverson has played over 50 minutes at this point and With every ounce left in the tank, Iverson drives in hard, stops on a dime, changes gears, and steps back for a corner three with Lue left on the hardwood at Ai’s feet. CASH. Iverson knocks down the biggest shot of his career, and the entire building was in awe of Iverson literally stepping over Tyrone Lue and he has some choice words for the bench. Sixers up 101-99. After a Lakers turnover, Iverson seals the deal with another jumper, the Lakers had no answer for the problem that is Allen Iverson. Final score of game 1 107-101.

Ai finished the game with 48 points. A Brilliant and legendary performance that still is remembered to this day. Now the Sixers are up 1-0, and that was the Lakers first loss in the postseason. But that was also their only loss of the postseason. The Lakers eventually ended up “gentleman’s sweeping” the Philadelphia 76ers, winning the next 4 games, however, the Sixers kept it competitive in 3 out of the 4 games.

For the Lakers it was not only a repeat, but it was step 2 in the process of their illustrious 3-peat. Shaq took home his second Finals MVP and Kobe’s arrival as a legit superstar was no longer a question or a doubt. The Dynamic duo essentially became the top two players in the NBA on the same team. Insane. Phil Jackson took home his 8th ring as a head coach. The 2001 Lakers may have been the best playoff team in NBA history, yet game 1 was the most memorable of the 2001 Finals.