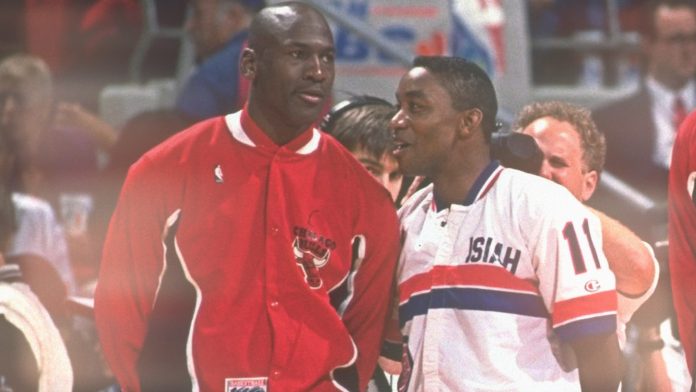 The two have never gone public with their hard feelings toward each other. On the court, they have slapped hands before the tip-off like everyone else. But later, Michael Jordan, in his hall of fame speech, trash-talked each retired player in attendance. Looked at Isiah Thomas and talked bout the freeze-out game. 11 years later, in the Last Dance documentary, Thomas was one of the players who got interviewed, and in the same segment, Jordan mentioned their animosity towards each other again.

After the documentary being watched by the millions in the United States, every time he was a guest on a basketball show, Thomas talked about the “fascination and disappointment” he felt in response to his portrayal in ‘The Last Dance.’ He added that it seems Michael Jordan was the reason he was left off the 1992 United States men’s Olympic basketball team and discussed the drama surrounding his absence.

Therefore every time Isiah Thomas goes on Live TV screen, he discredits or talks trash about Michael Jordan, which is the right thing to do. He was a guest of Shannon Sharpe’s “Club Shay Shay” show, and he ranked ’80s dynasties, the Lakers and Celtics as #1 and #2, and chimed in about those legendary Detroit vs. Chicago matchups. Zeke didn’t consider MJ as a competition:

“Just head-to-head, when all teams met, I was dominant over him [Jordan]. Up until 1991 [career ending wrist surgery] my record against him… he just wasn’t my competition. My focus was on Bird, Magic, Dr. J, Kareem. If you put Jordan in our era, he lost a lot in our era. I played a different kind of game than Jordan. Your genetic gifts, I’m going to eliminate all of that and now we’re gonna’ play basketball.”