Jeremy Lin Remembers Kobe Bryant Telling His Teammates: “I just came by to say bye to some of you bums who are going to get traded tomorrow.” 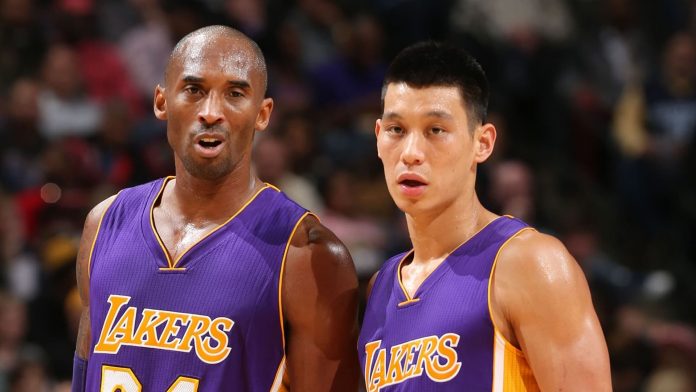 In Kobe Bryant’s post-achilles tear Lakers tenure (2013-2016), the team was a complete mess. From Jim Buss and Mitch Kupchak running the team, signing players that did not fit what the Lakers need to surround Kobe and losing Pau Gasol to Chicago. Los Angeles was in for another disappointing year.

The season also didn’t open the way the Lakers wanted it to either, their number 7 overall pick, Julius Randle, breaks his leg in the first quarter against Houston in primetime, ultimately ending his season. To add insult to injury, Kobe gets into it, once again with Dwight Howard. This was just a preview on what is to come for the Lakers. With an aging superstar in Kobe Bryant the goal of the season was to just be competitive. Kobe knew that the team was not capable of making a playoff run no matter how well he was playing. The team was constructed of journeymen, draft picks that did not exactly pan out, rookies, and of course Nick Young aka Swaggy P.

One of the journeymen who was acquired during the dark ages for the Lakers was former Knicks and Rockets point guard, Jeremy Lin. Lin was sent to Los Angeles to be the starting in the backcourt with Bryant, Lin recalls some of the most interesting practices and games being alongside the Mamba. There was the infamous practice in 2014 where Bryant is talking smack to Lin forcing him into turnovers and bad shots. Kobe built an entire mansion in Lin’s head, Bryant was probing Lin all practice especially during the last 5 minutes during team scrimmage. “He don’t want it, He don’t want it… Shoot m—F—er” Lin proceeds to chuck up a bad shot. “Practice get real uncomfortable when I’m in this M—-f—ker.” Savage moments like this are what made Kobe’s teammates appreciate him in the long run. Lin recently was on Danny Green’s podcast “Inside the Green Room” talking about his Laker experience and the stories he recalled playing with the Late Kobe Bryant.

Lin was explaining to Green how Bryant came to practice a day before the trade deadline, Bryant who was rehabbing a torn shoulder and was out for season had been away from the team for a couple of weeks, he shows up in typical Kobe swag, shades and Nike sweat suit on. As everyone in practice surrounds Bryant, forward Carlos Boozer asks “We haven’t seen you in a bit how come you came today?” Lin explains the response by Bryant flawlessly, “Kobe looks at us with a stone face and says I just uh, came by to say bye to some of you bums who are going to get traded tomorrow” Classic Kobe, with the serious demeanor, yet funny in hindsight, Lin goes on to tell Green, “a lot of the guys completely lost motivation to practice that day.” It was hard for Bryant to be nice to his teammates at the time, but these stories are the ones his former teammates will cherish forever, even if it meant getting traded off the team. Rest Easy Kobe, we all miss you!

ViaDaniel Malakismail
Share
Facebook
Twitter
Pinterest
WhatsApp
Previous articleShaquille O’Neal Fires Back at Draymond Green: “Mr. Draymond, I’d have torn you up on that block.”
Next articleAhmad Rashad: Inside The NBA Host Was The King of Cool