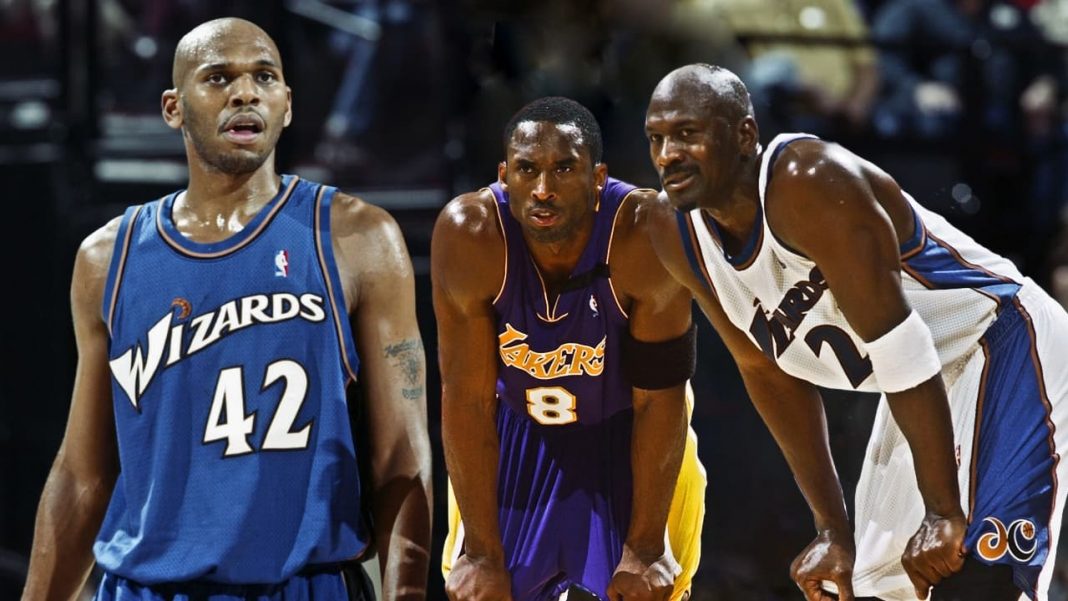 Jerry Stackhouse was a two-time All-Star, a superstar scoring machine in Detroit. After getting traded to Washington Wizards from Detroit Pistons, the superstardom of Stackhouse slowed down.

An off-season move sent Antawn Jamison to the Wizards and Stackhouse to the Dallas Mavericks – the place that he became a perfect complement to superstar Dirk Nowitzki – In 2006, the team had an incredible run in post-season. [ended up losing the championship to Miami Heat 4-2] After 18 years in the NBA, up and down, Stack is now the head coach of Vanderbilt.

On the latest episode of ESPN’s Woj Podcast, Jerry Stackhouse recalled his playing days for Michael Jordan’s Washington Wizards and the competitive scrimmages with the high school teenager, Kobe Bryant in Philly.

Stackhouse was regretful to play alongside his North Carolina idol Michael Jordan and he hated the Wizards years eventually – He was traded in 2002-03, and Jordan came back from injury same year – The players had to do in Michael Jordan way or play in somewhere else:

17-year-old Kobe Bryant, as a teenage kid, played scrimmages and 1-on-1 games with the Philadelphia 76ers players in 1995 & 1996. Stackhouse wanted to clear the air for what happened during those 1-on-1 matches. Amazed by how skilled Kobe was at the age of 17, Stackhouse said those scrimmages were merciless.

“What happened with Kobe was nobody really wanted to play with Kobe. Lionel Simmons used to always see him pulling Kobe to the side, like, ‘Man, you gotta pass the ball! You gotta learn how to do this!’ Because the older guys were from Philly. These stories kind of take on a life of their own. And yes, Kobe had some good days scoring the ball, because he could handle it so well. But he had tunnel vision at that point. You had pickup games. Sometimes he didn’t even get picked up. But again, because he’s so been great since this, these stories go back of ‘Oh, he beat Stackhouse one-on-one.’ Come on, man. Me at 20 years old, can you imagine a 17-year-old beating me consistently? I’d have hurt him first, real talk. Just physically, that could never happen to me. Did we play one-on-one? Yes. Did he beat me, did he maybe win a game? Yes. Did he consistently beat Jerry Stackhouse at 20 years old when he was 17? Hell no. I’m putting an end to that story. Was he super talented, and everyone saw great potential in him? Yes, but those scenarios of Kobe Bryant, they’re a little bit of a different story when you go talk to people that were actually in the gym.”