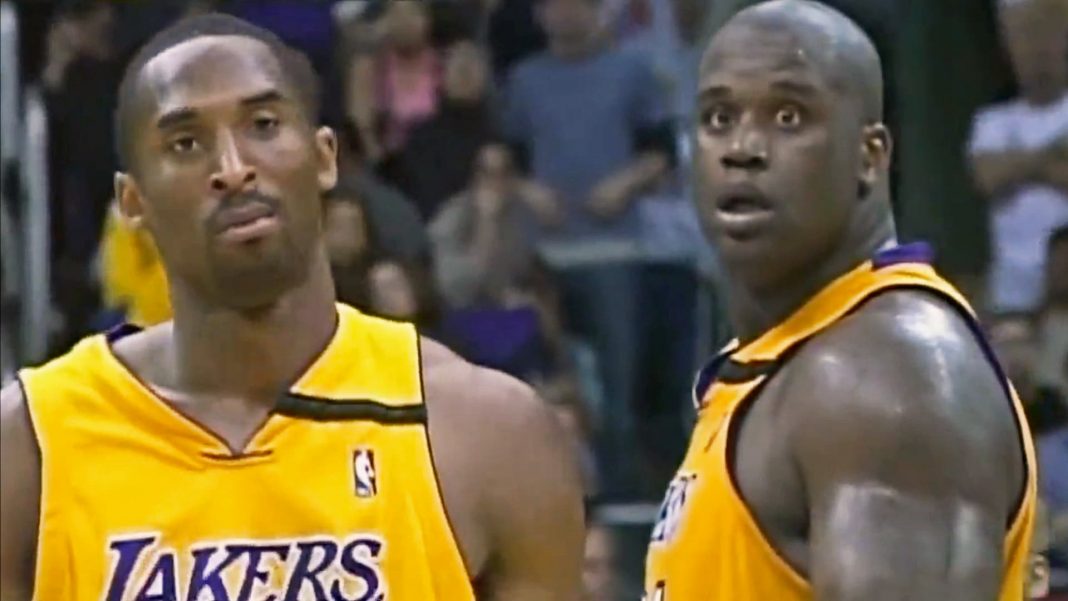 There hasn’t been a duo in NBA history with so much buzz surrounding their every move than Shaq and Kobe. The dynamic duo has seen its share of highs and lows, wins and losses, memorable loving moments, and let’s not forget the drama. They were the perfect soap opera for Los Angeles, both with such polar opposite personalities that collided on so many occasions.

With Shaq being the lovable, Charismatic, popular star who embraced the spotlight with his jokes, freestyle raps, and antics on the court after a big play to Kobe Bryant’s Jordan like personality, driven, focused, a student of the game who put in work while everyone else was out doing the typical LA thing, partying and thriving in the nightlife.

Yet when it was time for tip-off, the duo knew what to do, and that was to completely dominate their opponent. In their 8-year run from 1996-2004, the tandem of Kobe and Shaq won 3 NBA titles and appeared in 4 NBA Finals. Despite the success, the two alphas were known to bicker and beef with one another.

Especially during the 2002-2003 season, coming off a 3-peat and the team came out as flat as can be. With Shaq sidelined due to off-season foot surgery, the Lakers were reeling, starting the season 3-9, their worst start in over ten years. Even with Shaq coming back from his procedure, the Lakers were still an abysmal 11-19 through 30 games. It was crazy to see the champs look so devastated, look so vulnerable, many were blaming the injuries, blaming the roster that was on the floor, some even accusing the Lakers not being able to handle the pressure and the relentless grind to defend a title for the fourth straight year. No matter how you slice it, it seemed that the illustrious Lakers of Los Angeles were a step slower. With the rise of the teams out west, such as the Minnesota Timberwolves, San Antonio Spurs, and the rising Dallas Mavericks led by Steve Nash and Dirk Nowitzki, the Stars of LA were going to have to bring it a night in and night out.

Fast forward to December 6th, 2002, the Lakers are struggling at 8-12, but they got the Diesel back, slightly out of shape, but never the less it was still the immovable object on the block to go along with Kobe Bryant. The Mavericks were coming into town and were balling out of control, starting off 17-1, including a scorching 14-0 start to their season. Now the Mavs were built to play any style of basketball, including a run and gun fast pace style with Coach Don Nelson at the helm. Everyone could have easily predicted that the Lakers did not have enough firepower, and gas in the tank to take on the Mavs even in Los Angeles. The doubt was there, but you can’t count out the champs, right? The Friday night showdown on ESPN was one for the books. With a sold-out crowd, there was a certain feel in the air, the electricity coming from the crowd. It was an atmosphere at Staples Center that was nearly Finals like.

As the game started, the Lakers were keeping up with the Mavericks in the first quarter despite missing all five of their three-point attempts. On the other hand, it seemed like another hot shooting night for both Nash and Dirk, going a combined 4 for 5 from the field as Dallas took a 5 point lead after Q1. 29-24. Not bad, even with Kobe getting into early foul trouble, and Shaq missing a slam dunk. With the 2nd quarter underway, Kobe got off a quick bucket to cut the Maverick lead to 3, until former Laker Nick Van Exel checked into the game and provided a huge spark. Van Exel was instant offense for every team he played on, whether it was throwing a saucy no-look pass, crossing up a defender, or lighting up the opposing team in a matter of minutes. This game wasn’t any different. This was business as usual for Nick the Quick. He went on a tear in the 2nd, outscoring Kobe and Shaq. The Mavericks went on a run that did not look like it would stop; this did not look like they were playing back to back to back champs at all. This was going to be a slaughtering at Staples. The Lakers did everything in their powers to get on a roll, but nothing worked. Dumping the ball down-low to Shaq only resulted in an instant shooting foul, aka “Hack-A-Shaq,” and the big man did not capitalize on his free throws. The Lakers tried running the offense through Kobe, but that resulted in 3 turnovers and missed shots. Bryant and O’Neal combined in the second quarter for 1 made field goal. 1. Uno. Once again, this did not look like the Lakers we all were accustomed to watching. With the Staples Faithful BOOING the Lakers off the floor at halftime, there had to be some adjustments to even make the game competitive. The score at halftime, 64-36.

As the third quarter began, the champs were looking for anything, any sign of hope to get out of this 28 point deficit. In the middle of the third quarter, it seemed all too bleak for Los Angeles as the Mamba made a move and pulled his groin. With Bryant agonizing in pain from the twist, the role players for Los Angeles stepped up, Rick Fox, Derek Fisher, Robert Horry, all came alive in the third. Although all three players were hitting jumpers and outscored the Mavericks in the 3rd quarter, 25-24, the Mavericks were continuing to cruise and had the game on lock. Van Exel, Nowitzki, Steve Nash, and Adrien Griffin led the charge in the third, with a 27 point lead headed to the fourth.

A wise man once said, “it’s not how you start; it’s how you finish.” With the fourth quarter starting, and Kobe looking over to team doctor, Gary Vitti, tugging his arm, pleading to him to not let him sit out, “Gary was going to rat me out,” Bryant said. “I had to jerk his arm out of the socket and say, ‘I’m all right, man. Don’t snitch on me. Let me play.” Bryant told ESPN after the game.

Once he got the clearance to play, The Mamba came alive and was in attack mode when it mattered. Kobe and the Lakers orchestrated one of the greatest rallies in NBA history and the biggest comeback in Laker history at the time. Something sparked the champs, “We could have easily just rolled over, and I don’t think anybody would have really been too surprised at that because we’ve been playing so bad,” Bryant said to ESPN .” It shows the heart of a champion still beats inside of us. We’re fighters.” now it was not just Bryant who made plays during the fourth, Brian Shaw and Shaquille O’Neal chipped in to go along with Kobe’s heroics. The Lakers scored an unreal 44 points to the Mavericks 15, “We choked, just flat-out choked,” Van Exel says after his 25 points off the bench seemed like they did not matter. During the fourth quarter, it felt as the Mavericks looked lost, Mark Cuban couldn’t even buy his team a bucket. It was a complete 180 degree flip of events. Bryant was in a zone scoring 21 of his 27 points in the fourth quarter alone.

With the game tied up at 103 after Brian Shaw’s mid-range jumper, the Mavericks squandered their opportunity to take the lead. The Lakers got the ball back with a little over twenty seconds to go, and the Mamba, who always attacks so viciously, no matter how hobbled he is, made the Mavericks his prey. Kobe took the dribble hand-off from Brian Shaw, causing a switch, and look who is on Mr. Bryant, none other than the guy who was torching the Lakers all night, Van Exel. As Kobe quickly scans the floor, he notices the middle of the paint wide open to operate on. Bryant takes two hard dribbles, accelerates towards the corner where Robert Horry is ready to catch and shoot, stops on a dime, spins into the purple paint, rises and leans in, releases his jumper at its apex, and….. “It’s GOOD!” Bryant has given the Lakers the lead! 105-103! Time Out Dallas! It seemed as the ball was hanging in the air forever as Kobe shot it. Regardless, KB has given the Lake Show the lead with 8.4 seconds left. It comes down to the final possession in-game where it looked to be over at halftime. From Boos to cheers, the Lakers rose from the bottom of the barrel to steal the lead! Amazing.

Now the game was not over just yet, 8 seconds left with four capable scorers and shooters on the floor for the Mavericks to tie or even take the lead appeared possible. But once again, the champs showed the grit and the heart of why they play this game. Nash gets the ball up top, 8 seconds, 7 seconds, Bryant quickly switches on the shifty guard forcing him to his left, 6 seconds, 5 seconds, 4 seconds, Nash slips, loses his footing, and it ends up in the hands of Michael Finley for the last shot for the win, 3 seconds, 2 seconds, 1… and it’s no good! Devean George gathers the rebound and the Lakers Win! What a game. It went from nothing to something, from rain to sunshine, negative to positive. However you slice it, the Mavericks were clearly the better team, maybe they did choke, but as Rudy T famously said, “Don’t ever underestimate the heart of a Champion.”

The Mavericks bounced back from this loss, with a 60 win season, and all though they also lost in the Western Conference Finals to the Spurs, there was no doubt that the Mavericks were going to be a constant threat to throne each and every season. However The rest of season did not fare well for the Lakers, finishing 5th in the West, between the ongoing issues with Kobe and Shaq, and the lack of playoff success, losing in the Semi-Finals to the eventual champion, Spurs in 6 games, this was one of the last few brilliant moments between the Dynamic Duo of Kobe and Shaq in the early 2000s.

Lakers Vs. Kings in 2002 WCF: A Historical Look Back