Home NBA LeBron James Vs. Paul Pierce – An Underrated Rivalry for the Ages 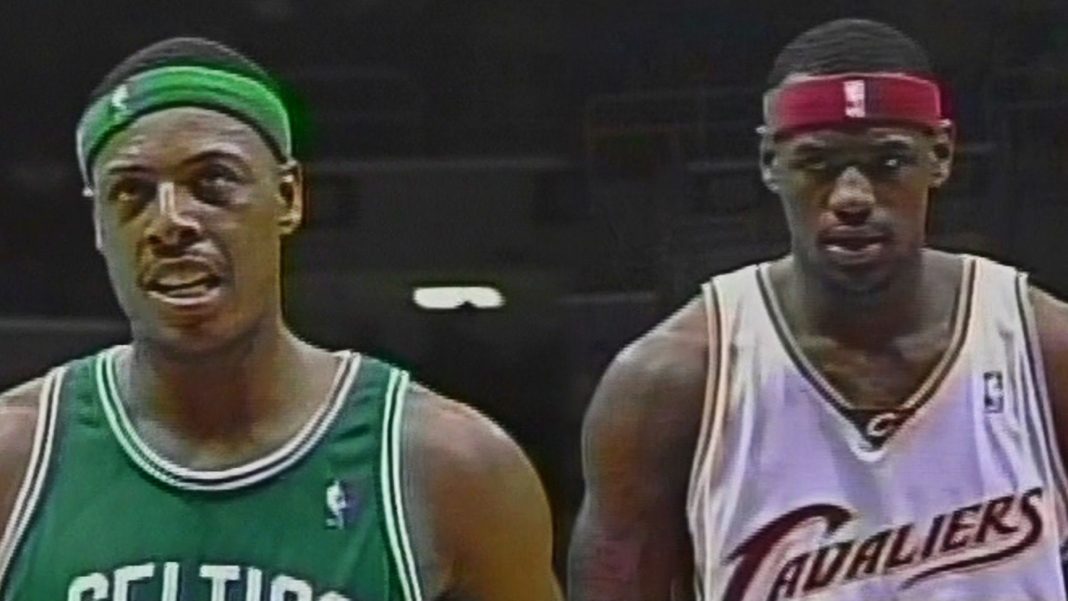 Ever since he was a teenager, LeBron James has been talked about, raved about, and mentioned as the next big thing. From being Magic Johnson 2.0 to next Michael Jordan. The comparisons and the praise have not stopped for James, even today. Kendrick Perkins calls LeBron the greatest 35 year old player in league history. To LeBron’s credit, he has lived up to many if not all expectations since being the 16 year old Kid on the Sports Illustrated cover.

From the Lance Stephenson’s to the Draymond Green’s James has conquered his competitors for the most part. Although he did struggle against the Warriors, winning 1 out of 4 matchups against them in the NBA finals, he did gain the respect and the credit from Golden State. But there has been one player in the NBA who constantly keeps tabs on LeBron James from his debut in 2003 until today. One Player who has even gotten the best out of LeBron beating him in the playoffs early in James’ Cavalier Days. That player is Paul Pierce. The all-time leading scorer in Celtic history. The man that Shaq called “the Truth”, Pierce has been known to publically call out James without any real pushback by LeBron. In his latest attack in late May of 2020, while on the set of ESPN’s First take, Pierce snubbed LeBron by leaving him out of his top 5 players of NBA history. “What has LeBron done to build up any of these organizations” referring to the Cavs, Heat, and Lakers. Pierce continued to jab at the King. Perkins in LeBron’s Defense called Pierces list a “personal” one, he goes on and mentions their past history of matchups and altercations that ultimately finalized Pierces choice on his top 5.

What has built up all this frustration with Pierce? Is it the fact that LeBron exercised his right to go and sign to another franchise? Is it the fact that LeBron’s Heat days he flat out dominated Pierces Celtics in 2011 and beat the Celtics in a Game 7 the following season? Is it the fact that pierces old teammate Ray Allen left for Miami and teamed up with LeBron to help the Heat win another title? Or does it stem deeper than just basketball? Has the media coverage and the love for LeBron has turn Pierce bitter. That the so called Chosen one actually panned out to just about everything he was supposed to be. What stemmed this ongoing beef?

It’s evident that Pierce has a personal issue with LeBron James to the point where he is discrediting his game. According to Kendrick Perkins on ESPN’s “Hoop Streams” Pierce’s long running feud with LeBron started in 2004 in a pre-season game. Perkins explained the noise LeBron was hearing before the game with all his surrounding hype, Pierce scoffed at the fact that LeBron was known as “The Chosen One”, He proceeded to talk smack to the Cavs bench during that game. “We were playing in Columbus, Ohio my rookie season… Paul is talking big noise to the Cavs bench, so Paul actually SPITS over at the bench, the ultimate disrespect. Ever since that moment, LeBron James and Paul Pierce hate each other.” Wow, I couldn’t believe it when hearing this from Perk, you actually spat over at the Cavs bench. I understand that Pierce was trying to intimidate LeBron, but you can’t go out purely disrespect the guy. Perkins was Pierce’s teammate and has had his back from day 1, however the amount of disrespect Paul put on LeBron even had Kendrick shook. “I think Paul’s list is more personal, there’s no way in hell you can say LeBron is not top 5, you may not have him as your GOAT, but you can’t say he’s not top 5.” I completely agree with you Kendrick. Even the greatest of all time to most, Michael Jordan, who still has a bitter beef with Isiah Thomas did not use bias to rank him behind Magic Johnson as the 2nd greatest point guard who has ever played. Isn’t it ironic that the truth has actually hurt Paul’s feelings?

In 2006, Pierce dropped a career-high 50 points on LeBron and the Cavs, all for LeBron to go for a 43 point triple double and the Win, in a thrilling 113-109 overtime victory. LeBron and Pierce are not shy when it comes to going head to head, bucket for bucket, point for point in big games as well.

In 2008, The Celtics were in the midst of their title run, and in the Eastern Conference Semi-Finals LeBron went toe to toe with Pierce in a grueling 7 game series. In Game 7, each forward went bucket for bucket, shades of Larry Bird taking on Dominique Wilkins in the 80’s. Despite 45 points from LeBron James, Paul Pierce’s 41 points sealed the deal, advancing the Celtics to the Eastern Conference Finals. It seemed as Paul Pierce might have the upper hand on his arch nemesis that for no reason has beef with.

2010, the Cavs lead by LeBron James secured the number 1 seed in the East, James got the league MVP again and were looking to seek revenge against the number 4 seed Boston Celtics. Now the game plan was to slow LeBron down and let his role players beat you, The Celtics did just that, especially Pierce, locking in on the defensive side of the ball, holding LeBron to 21 points per game on just 34% shooting. Boston wins in 6, LeBron rips off his Cavs Jersey as he storms off the court. Pierce once again has the upper hand in this beef. But the tides are soon going to turn…

In 2010-2011, When LeBron James decided to take his talents to South Beach, it seemed as if the Celtics were not phased. Rondo, Pierce, Allen, and Garnett beat the Heat in their regular season opener, but by the time the playoffs came around, it was a whole different ball game. With aide from Dwyane Wade and Chris Bosh, LeBron finally had the roster to get over the Celtic hump, and with the Heat winning the Eastern Conference Semi’s in 5 games. Although the season didn’t end in LeBron’s favor, it was a step in the right direction for the King.

In 2012, the Heat squared off against the Boston Celtics in the Eastern conference finals, the Celtics were another year older but had that veteran savviness to take out Miami. Led by Rajon Rondo for most of the Series, Paul Pierce had lesser of a role than what he had in 2008. Never the less, Pierce squared off with LeBron in a 7 game series. The Heat win the series and get back to the NBA Finals. LeBron finally captures his first title vs OKC and the offseason begins.

The 2012 offseason created even more tension not just between Paul Pierce and the LeBron led Heat, but beef between the Boston Celtics, the Big 3 era was officially over, Ray Allen signs with the Miami Heat. Which creates an even bigger issue for not only Pierce but with Kevin Garnett and Rajon Rondo as well. Ray Allen was a pivotal piece for the Miami Heat to go back to back.

In the 2013-2014 season, the Celtics decide to not only rely on the offseason to reload, they essentially blew up the entire roster, The Brooklyn Nets traded everything and anything to acquire veterans Kevin Garnett and Paul Pierce. The Brooklyn Nets also finished with the 6 seed in the East and faced LeBron and company in the Eastern Conference Semi’s. Pierce was feeling himself after making a clutch defensive stop on Kyle Lowry and the Raptors to clinch their first round matchup. So he decided to take on defensive duties on LeBron James. In game 4 with Pierce draped all over James, LeBron torches Paul Pierce and the Nets for 49 points, and The Heat Close the series out in 5. Once again the so called beef initiated by Pierce really has not affected LeBron.

In 2017, LeBron was asked about Paul Pierce’s Final season and LeBron really brought some light into the two’s dark past. LeBron told the media that “Pierce has left his mark on the game” and respected the Truth, James made his case for Paul Pierce’s Hall of Fame bid as well. A true professional, no matter how much bad blood Paul had for LeBron, there was nothing but good to say about Paul Pierce.

LeBron and Pierce’s beef had been put to a halt for a bit. LeBron clearly had the upper hand in this rivalry, but in 2019 while on the set of NBA Countdown on ESPN, Michelle Beadle asked Pierce about his defense and who gave him the biggest problems, along with the crew asking Pierce who was LeBron’s biggest rival or toughest competition throughout James’ career. His response, Classic bitter Pierce, ““You got guys like Melo, KD, but it’s me, of course. No one has had more playoff battles in more meaningful games than me.” He continued by saying “Why do you think he moved to Miami, I sent the u-haul to him” Woah there Paul! Re kindling the spark that is the beef between you and LeBron, the subtle jab was only the beginning of Paul’s retirement hate tour. Which all comes back to Paul Pierce talking smack in 2020. A 16 year rivalry that is honestly one of the most underrated rivalries of all-time. Although Pierce really has not won any of these beef situations since 2010, it once again seems not to phase LeBron. Will Pierce continue on with his antics? Will LeBron ever respond back? Regardless Pierce needs to realize that as a competitor it’s understandable to want to beat somebody, but enough is enough with the shade. Paul Pierce is regarded as one of the best scorers and forwards of his era and has accomplished feats that many greats have not, such as win an NBA title, earn Finals MVP, and be the all-time leader in points for the respective franchise that they played for.

Pierce had an illustrious career there’s no doubt about that. But when it comes to being an analyst, Pierce has let his personal bias kick in more than a few times. Besides him picking the Celtics to win just about every playoff series, Beefing with LeBron James, and talking himself in being the Greatest Celtic ever, and Pierce also claimed that Dwyane Wade did not have a better NBA career than him. Although the numbers and accolades (3 rings to 1) prove Pierce wrong, he did not back down and even doubled down by saying that if he played with a guy like Shaq or LeBron James he would be sitting pretty with 5 or 6 rings. The twitter world has made Pierce their punching bag when it comes to his hot takes. This won’t be the last you’ll hear from Mr. Pierce.