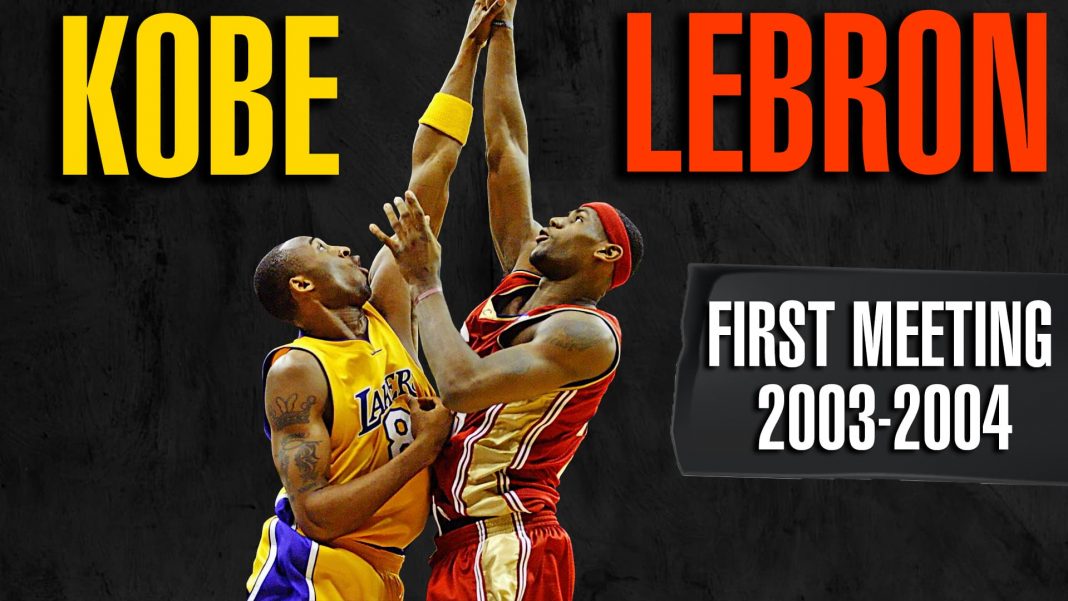 A sold-out crowd in Los Angeles ready to witness a meeting of NBA Stars Present and Future. The 19-year-old LeBron was customarily cool beforehand, downplaying his first regular-season meeting with Kobe Bryant. But in reality, he was nervous as hell. You would get that way with somebody like the Black Mamba.

Lakers were short-handed without Shaquille O’Neal on the court. Not forget to mention Karl Malone being out because of his knee injury. To start the game, LeBron was guarded by Kobe at one end and guarded by Gary Payton at the other.

Early on, Bron showed his quick first step and the spin, but referees did not agree with him. No look passing like Magic Johnson and fist-pumping after the play, he knew all eyes were on him. Meanwhile, Kobe had a cold start, making only one jump shot. Bron’s best moments came at the beginnings of the first three quarters. He hit three consecutive shots over a 1 minute 45 second stretch of the first quarter, victimizing Kobe three times. He connected on a one-handed hook shot over Kobe, spun away from him and knocked down a baseline jumper, and swiped the ball from Bryant at midcourt before getting fouled. LBJ capped the quarter by beating Horace Grant for a three-point play.

Kobe was eager to guard James on every occasion, but LBJ made zero mistakes in the first quarter. With 2:30 left in the first, Bryant answered by shooking Cavs defense with a quick spin layup.

Unluckily, Kobe sprained his surgically repaired right shoulder. He was injured with six seconds left in the first quarter when he faked Kendrick Brown into the air outside the three-point line, and Brown landed on Kobe’s shoulder. Kobe scowled in obvious pain as longtime Lakers trainer Garry Vitti was checking his shoulder. He made three free throws but left the game.

LeBron and Kobe occasionally found themselves across from each other on the wing. Bron appeared to draw more from the challenge of it, pressing the 1on1 situations with flying moves to the basket and jump shots.

Kobe returned to the game with 7:33 remaining in the second quarter. But he was clearly not himself. His only shot was a left-handed jumper over James from the outside of the foul line that didn’t even come close. He rebounded with his left hand, threw an outlet pass with his left hand. He was hi-fiving with his left hand, pumping his fist with his left hand. Then he took a horrible 20-foot jumper, left-handed. It barely hit the side of the rim. Kobe was half a player and posed no scoring threat. Phil Jackson saw the left-handed shot and realized that it was time to move somebody else in there, get him out of the ball game. But he gave a chance to Kobe to show LeBron some schooling. Bryant left the game again with 2:27 left before half time. He finished with 10 points, five rebounds, and two assists in 17 minutes.

Cleveland won the first quarter 21-19, Lakers took the second, 21-17 and Cavs outscored Lakers 23-10 to finish the 3rd quarter for 65-60 lead. In the third quarter, LeBron hit two hanging jumpers and went behind his back to beat Gary Payton in transition before delivering a no-look pass to Kevin Ollie for a layup. This was a good opportunity for LeBron to get a win in Staples, with being Kobe and Shaq out, but it just came down to making shots in the 4th quarter. Gary Payton’s shot with 6 minutes remaining enchanted a 6-0 run that gave Lakers a 77-72 lead, and they were on top rest of the game.

Lakers shot 10-of-20 in the final period to 5-of-20 for the Cavaliers. LeBron missed all five shots he took in the quarter, and he was 6-of-20 overall. Scoring 16 points and dishing seven assists, he made only three of his 15 shots over the next three quarters and committed six turnovers. Lakers won by outscoring Cavs 29-14 in the final period. Kobe’s injury seemed to take the fun out for LeBron. He was largely was a non-factor in the final five minutes.

Bron untucked his jersey as the final seconds expired, shook hands with Gary Payton and Derek Fisher, then flung his headband to the crowd. Even though Kobe’s injury put a damper on his first game against rookie sensation LeBron James, Lakers were victorious over Cavaliers 89-79. Kobe playing just 17 minutes, a true showdown would have to wait for the future.

The night was a nightmare for Kobe, who spent the last 25 minutes of the game in the training room, but LeBron later in the afternoon, filmed a guest appearance on the sitcom My Wife And Kids with Damon Wayans.

So there it was The Return of The King. He said he wasn’t putting any extra emphasis on the game. But he knew when the spotlight was on him. He knew the TNT cameras were there. He talked about wanting to put on a good shot to draw a good rating, but LeBron guarded Gary Payton, not Kobe. So two stars didn’t get to go at each other in a classic matchup.

Earlier in 2003/2004 season, NBA commissioner David Stern appreciated the teenage sensation LeBron James had achieved, but he worried that it sets a bad example for high school payers who are focused solely on trying to make an NBA roster after graduation instead of going to college. Before LeBron, players such as Kobe Bryant, Kevin Garnett, and Tracy McGrady have made huge contributions to the league.

Stern was ready to propose NBA players association a minimum age of 20 for entry to the league. Because of a young man becoming a rocket scientist are better than making the NBA.

Those were the years…

The Hall of Fame isn’t only filled with college recruits, after all. And LeBron James, alongside Kobe Bryant, two of the greatest high schoolers to ever played in the NBA.