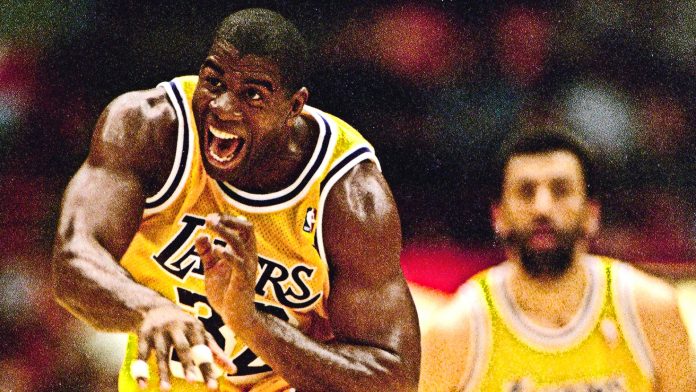 On January 31, 1996, Magic Johnson did a comeback to NBA for one reason above all the others. He didn’t leave the game on his own terms. That never stopped bothering him. Lakers’ front office also wanted him to come back. In 1992, he left the game without making it into a regular-season game. Four years later, Magic decided to the best place to get an answer was the basketball court. He began practicing with the Lakers. Head coach Dell Harris was simply saying, “I don’t care if I have to sleep outside his house. I want him.” Fans bought all the tickets for the Golden State Warriors game after they heard about Magic’s return to NBA.

He was a different player at age 36, he had built himself up in the gym and had a power forward look. As 27 pounds heavier than his playing days in the ’80s, he would play a lot of power forward and sometimes center. Nobody in the Lakers wanted Magic to chase little guards around. He was too old for that.

He was not in NBA shape but enough shape to give Latrell Sprewell the pass fake of his life. Joe Smith who guarded him was four years old when Magic was drafted by the Lakers. He played 27 minutes, scored 19 points on 7-for-14 shooting, and dished out 10 assists as the Lakers won in his comeback game. Magic played the low post some and also had point guard duties as playing 4-5 positions even when Nick Van Exel was on the floor. Most importantly, he energized the young Lakers squad, and it was like the legend was never left the game.