Home NBA Mahmoud Abdul-Rauf’s Protest: How the NBA Took Away His Livelihood 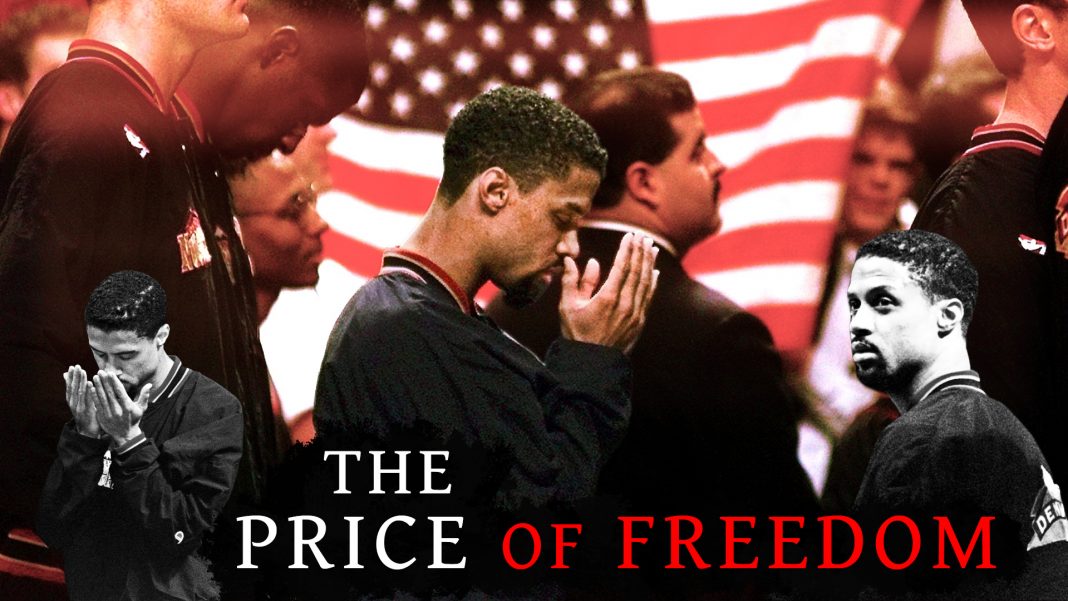 Entering the year 1995, Mahmoud Abdul-Rauf was largely considered as the best shooter in the NBA while shooting 39 percent from 3-point range. He was shooting six 3s a game, which was rare in the 90s. 19.2 points per game, he finally got a nice run. His 6th season in the league, scoring 32 against 72-win Chicago Bulls or dropping 51 over Stockton. He definitely was not a typical point guard like Gary Payton or Tim Hardaway. Not the passing, but relentless scoring was rarely seen in point guard position at that time.

‘A Steph Curry, Damian Lillard, or Trae Young prototype.’ Like Phil Jackson tweeted in 2013: “Never seen anything like Curry? Remind you of Chris Jackson/Mahmoud Abdul-Rauf, who had a short but brilliant run in NBA?”

Who would have thought that his independence and spirituality motivated him to take a stand that shook the nation?

March 12, 1996, one NBA rule says: “The league requires attention to be paid during the National Anthem.”

Abdul-Rauf was in violation. But the same rule was not a part of the collective bargaining deal, and that left Rauf a chance for a legal dispute. Deputy commissioner Russ Granik said: “Players, coaches, and trainers must stand and line up in a dignified posture during US and Canadian anthems.”

Same-day, he got suspended without pay until he agreed to stand. Abdul Rauf missed a game the next day because of suspension, one of his teammates double-crossed him, dismissed it as a “distraction.”

As for the result, NBA commissioner David Stern not only suspended Mahmoud Abdul Rauf but also fined $32,000. The damage to his career was already done. But the days later, he and league office met in the middle. He could stand for the anthem but with his head bowed in prayer. And David Stern predated the rule to have it changed.

Anthem drama was not the first time Mahmoud Abdul-Rauf had been the center of attention. He was a superstar at Louisiana State who had to overcome the effects of Tourettes syndrome – At 17, he was diagnosed with Tourette Syndrome. A genetic disorder described as uncontrolled movements that affect about 150,000 people in the US – People knew him as the wunderkind scorer who once made 283 consecutive free throws in high school practice or 55 points in a college game. Of all the players in southeastern conference history, only Pete Maravich scored more points in a season the 965 Abdul Rauf scored in 1988/1989.

Mississippi player of the year honors twice at Gulfport High; he led Southeastern Conference in scoring as a freshman and freshman record 55 points in one game. After two years at LSU, he was drafted 3rd overall by the Denver Nuggets in 1990. All America famed basketball star, filling record books at Gulfport High and LSU, and then the NBA. Blackballed at the best time of his career. At the age of 26. Basketball left Abdul-Rauf unfulfilled.

Now at age 50, he dominates 3-on-3 games against just retired 30-35-year-old NBA players. In his prime, giving the chance that Steph Currys, Damian Lillards currently having, he would definitely dominate the NBA today.