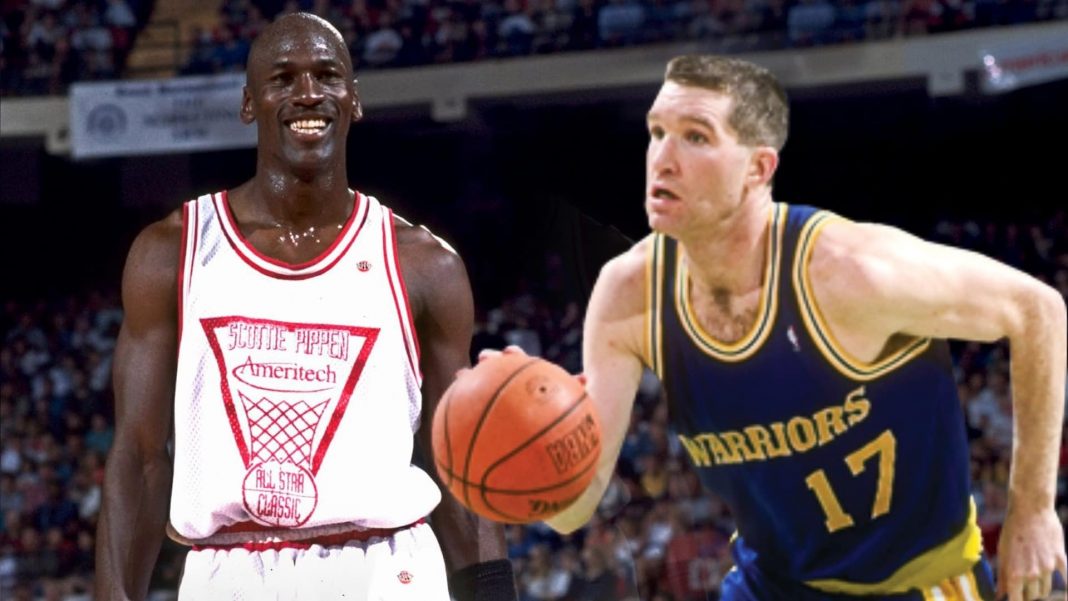 NBC Sports Chicago aired a Michael Jordan ‘I’M BACK’ documentary to reminisce Bulls fans about the legendary tale from 25 years ago. In the 30-minute doc, ex Warriors and Hall of Famer, Chris Mullin shared an untold Michael Jordan story. Yes, believe it or not, Jordan played pick up basketball with Golden State Warriors players months before announcing his comeback. And he roasted the squad including Mullin, Tim Hardaway, and Latrell Sprewell.

Not played one time but a few times – Michael and Rod Higgins (Warriors forward) were good friends and teammates from MJ’s rookie season – Mullin was on his way to the practice and Jordan asked, ‘Do you think it’s OK if I practice with you guys?’ Mullin called his coach Don Nelson and his response was, ‘Hell yeah!’

Jordan didn’t show up practice in basketball gear. But both Mullin and Michael were in the same size, 6-foot-6:

“I was injured at the time so I do remember Michael coming down to practice and we’re basically the same size, the same sneaker size, I think we had Tim Hardaway and Latrell Sprewell at that point in time. They might have been popping off a little bit. Michael said, ‘Mully, let’s go, get me your gear.’ He went to my locker, put my gear on, and went out there and basically single-handedly beat the Warriors down by himself. And that’s when I was like, this guy is coming back.”

“I think we had already played 65 games maybe, and so we’re on the way to the airport to go to Indianapolis and I said, ‘Jud, what is Phil going to do?’ We’ve already had 65 games. Michael hasn’t been here for almost two years. You think he’ll start him? Will he bring him off the bench? What’s he going to do?’ And Jud, without skipping a beat, he goes, ‘Steve, Steve, Steve, listen, as a general rule, when you have your own statue outside the building, you’re in the starting lineup.’ So I will always remember that comment from Jud, and the timing was perfect and we laughed. The next night was that game in Indianapolis. It was surreal, it really was.”