Michael Jordan Explains To David Letterman Why NBA Banned His Shoe: “Didn’t Have White In It.” 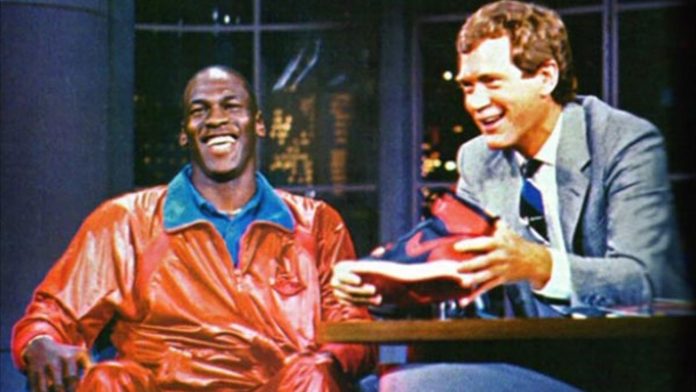 A Redditor named babbagack shared the David Letterman Show interview footage of 23-year-old Michael Jordan, who just came back from playing golf. Both gentlemen were talking about the black Air Jordan 1s that immediately banned by the NBA.

The conversation kicked off with Jordan, asking Letterman why he was wearing Adidas shoes. In response, Dave made his joke about the controversially banned Air Jordan shoes.

“They didn’t have a “WHITE” in it.” Letterman came with the hook, “Neither does the NBA!”

Jordan had colossal sponsorship deals with the help of his Nike contract and the genius of his manager David Falk. McDonald’s, Coca-Cola, Wilson Basketball, Chevrolet Chicago – Jordan drove Corvette in the ’80s – Jonhson Hair Care Products, and many more.

The interview is from June 1986. Jordan and the Bulls were eliminated by the legendary Boston Celtics team a month before. His Airness’ 63 point performance – Larry Bird said, ‘I would never have called him the greatest player I’d ever seen if I didn’t mean it. It’s just God disguised as Michael Jordan’ – was not enough to save his team in the first round. Michael played only 25 games – broken foot injury made him sat 20 weeks – in the 1985/1986 season, but the team made the playoffs.

What was more compelling that near the end of the interview, Jordan talked about retiring at age 32 and pursue professional golf. In fact, he ended up retiring at age 30. It was his first retirement.