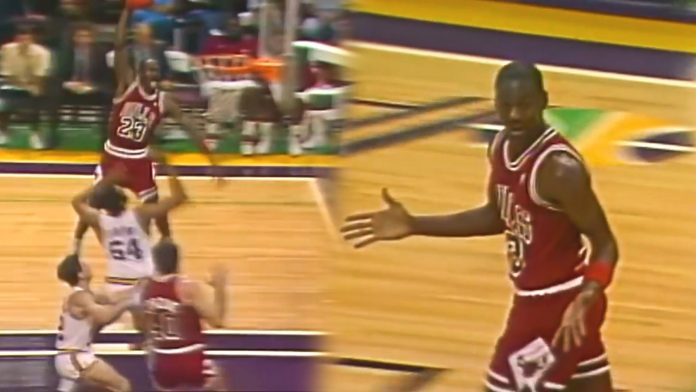 December 1986, the Bulls are on a road trip. Their superstar, Michael Jordan, was putting the finishing touches on his masterpiece when a courtside heckler tried to talk trash. “Hey, Michael! Pick someone at your own size!” Michael made it all count with 47 points, 9 assists, 3 blocks, and 3 steals in a 105-101 Bulls victory over Utah Jazz.

With an unbelievable effort from MJ in the third quarter, who in one stretch directly contributed to 23 of 25 Bulls’ points. He did it with six baskets, three assists, three free throws, and one locked shot resulting in a fast break.

Chicago had the best record in the league (12-3) and a remarkable 8-1 on the road. The team was tired, stuck in cement. Jordan took over the game, and he was at his best, hitting 12 of his first 16 shots to keep his team close. MJ loved playing against Jazz, a year earlier (1986) scored 45 in Salt Lake.

And how about that legendary Jordan trash talk tale?

Michael posted up John Stockton because he played point guard in a stretch of the game and dunked by him. After that dunk, Jordan said he heard a Jazz fan on the front row complain to him, “Why don’t you pick on someone your own size?” So the next time down, MJ flew over 6-foot-11 Mel Turpin for an astonishing dunk. Jordan couldn’t’ resist getting the last word at the Jazz fan: “I said, ‘Is he big enough? Is he my size?'”