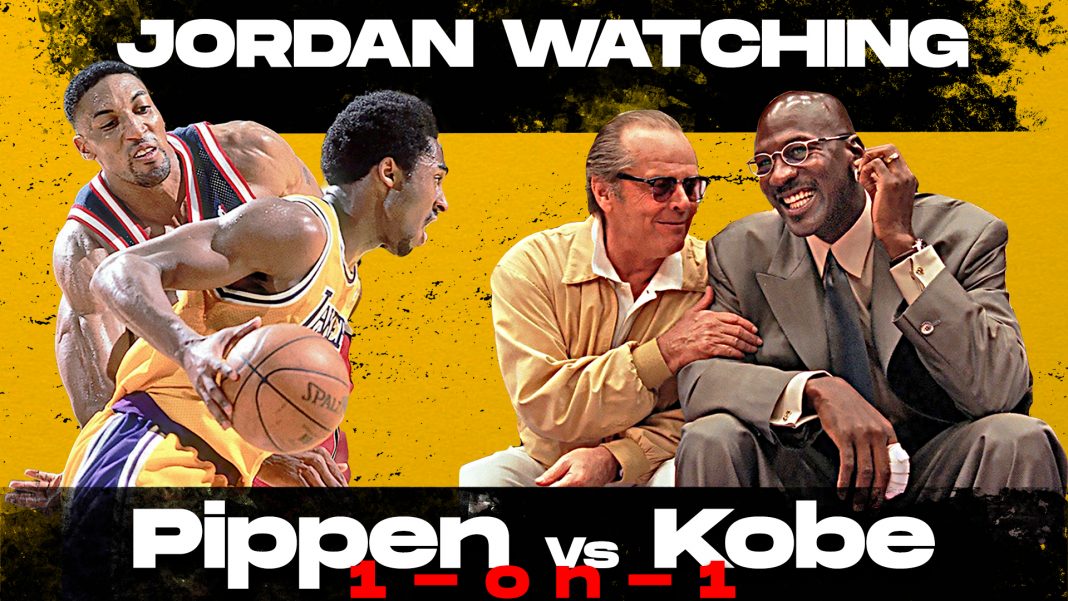 LA Forum is packed. Michael Jordan is retired and lockout-shortened 1998-99 NBA season was just kicked off. Scottie Pippen signed with Rockets, Dennis Rodman after all the drama signed with Los Angeles Lakers. And they’re about to play against each other. It was the time to impress his Airness Jordan. Prince of the NBA Kobe Bryant put his skill to display. Watch he cross Scottie and thinking that Michael critiquing everything he does.

More exciting stuff is Michael Jordan was in a grey suit with glasses on, watching the game right next to Lakers superfan Jack Nicholson. He’s reacting 1-on-1 plays of young 19-year-old Kobe Bryant and his ex-teammate Scottie Pippen, both going at each other. Kobe is cocky and mimicking like, “Pippen can’t guard me.” Jordan is laughing it and lovin’ it.

Jordan also had a cut on his finger because of trying to lit a cigar. Most of the fans believed that Michael did not sign another one year deal with Bulls because of this injury which might slow him down during the short lockout season. And then, of course, Bulls fell apart, everyone went on their way.

Pippen is already having issues with his back. Did undergo surgery from his back multiple times and past his prime, but Kobe is already in a proving season right after being the youngest All-Star in NBA history. Scottie played almost 48 minutes a game that season, with back issues, he struggled against Kobe in the first game, 4 of 18 shooting. With Jordan in attendance, Kobe wanted to prove everybody again, Pippen was not a problem. The fans were also ready to see Rodman’s new hair color and Laker antics.

How confident Kobe is against Pippen? Just look at this screenshot:

Kobe shakes and crosses over Scottie Pippen and scores. Then he waives his head by looking at Michael Jordan and mimics, “Nobody can guard me! Even Scottie Pippen.” This was the beginning of the post-retirement MJ era, Jordan comes to see Rodman, Pippen in their new uniforms but Kobe steals the show and puts some great plays on Scottie Pippen.

So many legends in just this one game: Kobe, Shaq, Pippen, Rodman, Barkley, Olajuwon on the court. Jordan was watching on the side about 28-30 championship rings on one TV screen. Lakers take the game 106 to 90. Kobe had a successful 1-on-1 game against Pippen. Lakers were playing better basketball with Dennis Rodman. Why? Just ask Dennis. Because later in the post-game with Ahmad Rashad, Dennis Rodman forgot his wife’s name [Carmen Electra]