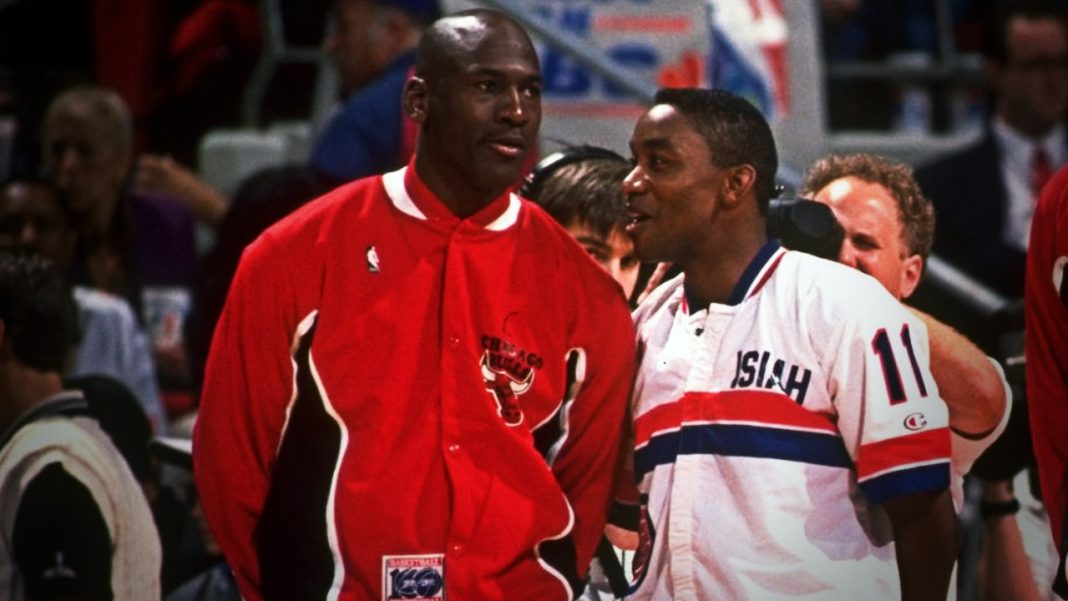 In 1991 the Chicago Bulls captured their first NBA title, Michael, Scottie, and Phil got it done against the Los Angeles Lakers in 5 games. It was a sweet victory and a moment that Michael Jordan will not forget. But by any means, it was not a Candy Land path for the Bulls to get to the Finals. In the previous two seasons (’89 and ’90), Chicago ran into the Detroit Pistons led by Isiah Thomas, Dennis Rodman, and Bill Laimbeer. The Pistons knocked the Bulls out of the playoffs in more ways than one. To Jordan, this was the ultimate test, and if the Bulls had any shot in winning a title, they must go through Detroit and come out alive.

The “Bad Boy” Pistons in the late ’80s were no joke, and hard-nosed, physical play was an understatement. The Pistons wanted their opposition to feel their presence, feel them wreak havoc, feel the pain they inflicted on every drive to the hoop, and every rebound you were going up for. Detroit wanted to make sure they had your number not only physically but mentally as well. The Pistons wanted to twist their competition in a “win at any cost” type way. That edge is what the Chicago Bulls lacked. When the Bulls got pushed, there was no push back. When Detroit got loud, Chicago got quiet. Chuck Daly and the Pistons even devised a plan to slow down MJ and ensure that if Chicago was going to win, it had to come from somebody else. The “Jordan Rules” made it excruciating for Michael to even step into the paint, the constant elbows, punches, smacks, and shots to the face and body wasn’t the most pleasant time for Jordan.

However, the tides turned in ’91, Jordan prepped himself for an eventual warzone and put on a little over 15 pounds of muscle to make sure Detroit could feel his wraith as well. The hard work in the off-season with trainer Tim Grover paid off. Jordan and the Bulls went into the Eastern Conference Finals with the utmost confidence against Detroit. The Bulls did not and would not back down to Detroit, and Chuck Daly knew he was facing the same team with a whole new identity.

With the Bulls up 3-0 in the series and game 4 slowly coming to an end for the sweep, the Detroit Pistons were no longer going to be the Eastern Conference champs, and their chance to 3-peat was shot down. The “Bad Boys” decided to put their heads down and walk straight to the locker room. No congratulating, no shaking of hands, no head nod, and or acknowledgment to the victor. The Bulls were cordial and respectful, in the past two seasons no matter how hard Jordan got his ass kicked, he went over to the Pistons, looked them in the eye and congratulated them, and a simple “good game” that a competitor gives to his opponent even after the heat of battle, respect was given and earned. But for Detroit, the bitter taste in their mouths led to one of the most controversial moments. Isiah Thomas recalls the moment they walked out as “No Big Deal,” claiming that Boston did that to the Pistons before in the playoffs, and nobody batted an eye. Jordan saw it differently in the Last Dance Documentary MJ had a few choice words for Zeke “Don’t let Isiah fool you, he’s an A**Hole” But since it was towards Michael the issue escalated.

As a competitor, no matter how badly you want to win, you have to respect your opponent. Losing hurts, it sucks, that’s no question but to walk out on your opponent who you purposely would abuse year after year, lacks class. I understand why the Bulls of the ’80s and ’90s are forever stung by the memories of the Pistons. But it was an opponent such as Detroit that taught Jordan and the Bulls valuable lessons on how to win and win with class. As great as the “Bad Boy” Pistons were (3 Finals Appearances, 2 titles), they will forever be known as the bitterest team to ever step foot on the court.