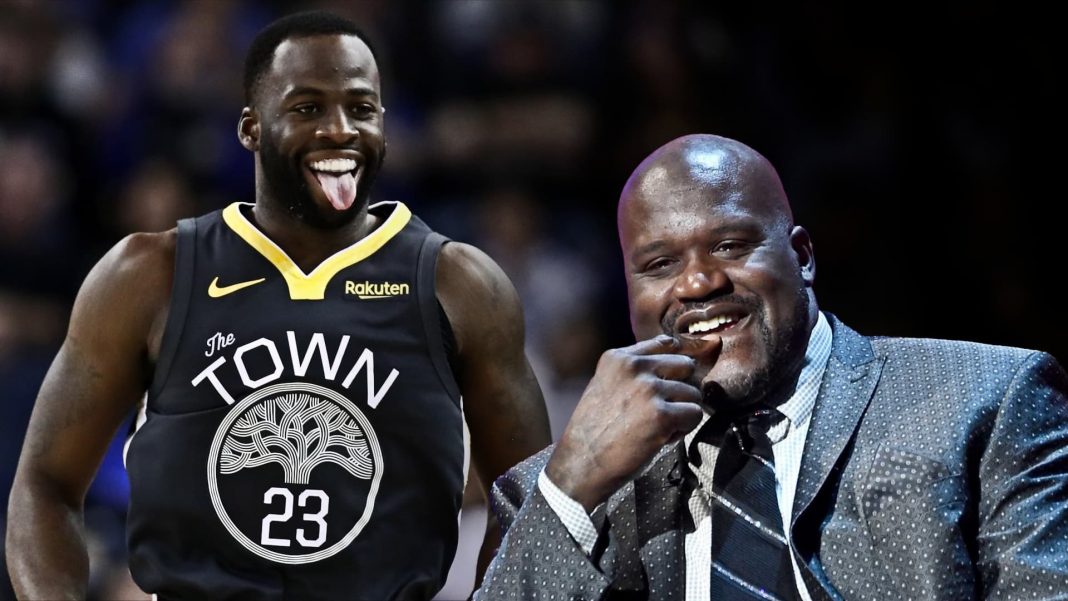 There are some superstars in NBA history that could play in any era, no matter the rules, the trends, the play-style, or coaching. One of the biggest mismatches, nightmares, and absolute beasts that can play no matter the year is Shaquille O’Neal. At 7’1” 320+ pounds the “Diesel” would body centers, get through double-teams with ease, and demoralize the competition with his intimidating power. Brute and sheer force was Shaq’s main game. See ball, catch ball, and dunk ball with all might. Superman was nearly unstoppable, although O’Neal’s kryptonite were his notoriously awful free throws (But as Shaq always said “I made when they count”). Many believe his kryptonite would be playing in a more spread era. One who truly believes that the most dominate player in NBA history could not keep up is, you guessed it, Warriors forward Draymond Green. Surprised? Not at all. The abrasive vocal leader of the Warriors went on the “All the Smoke” Podcast and mentioned how he admired Shaq, “Shaq has always been one of my favorite players. But I’ve always watched the game as a student of the game… Me and Steph Curry would have F**King destroyed Shaq in the pick and roll” Whoa there Dray, and it does not stop there, Green continues to say that O’Neal and his Lakers could not keep up. “In our era of basketball, we would have destroyed them. Although he counters his own comments by saying “In Shaq and Kobe’s era, we probably would have got crushed.”

Now Draymond’s comments do sound extreme with his claim that Shaq could not guard the pick and roll. Fair, but there is no way the Warriors are beating the Lakers (’00-’01) with just the pick and roll of Green and Steph. That matchup would be one for the ages, two completely different styles going at it.

Shaq heard what Draymond had to say and responded with a comment in typical “Diesel” fashion. On O’Neal’s Podcast, “The Big Podcast with Shaq”, Shaq did not hold back, “I try not to get personal with guys’ opinions, “however, Mr. Draymond, like you said, I’d [Shaq] have torn your ass up on that block.” Shaq did agree with Green with his testament that the era of which the game is played could matter, due to physicality/hand checking of the ‘90’s-00’s and the floor spacing, pace, and heavy 3-point shooting of today’s NBA. But none the less, Shaq is an anomaly, he was one of the players that you can drop in any game at any time, he would still put up the numbers, and have an enormous impact. “A lot of people don’t think I could play in this era, a lot of people forget I was the first big to take if off the glass and go coast to coast.” Shaq had a plethora of skills besides his drop step, spin move, and baby hook. Shaq was an underrated passer who can dime cutters, open shooters, and start a fast break. Let’s not get it twisted here, the Warriors may beat the Lakers but there is nobody on that team that would slow down the Big Fella.