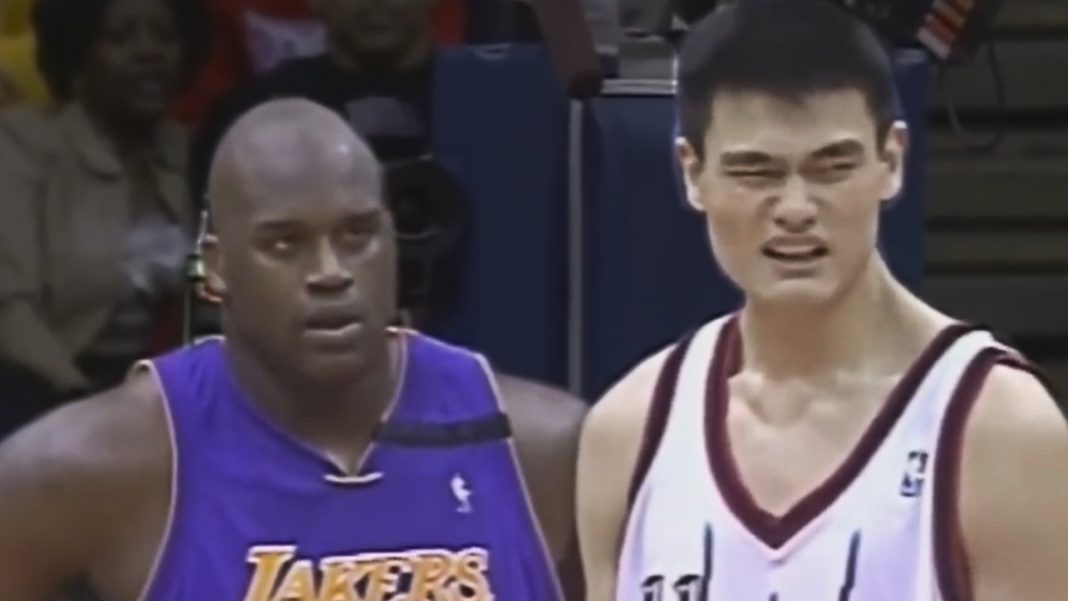 Beijing, 10:30 in the morning, the whole country of China was watching Yao Ming versus Shaquille O’Neal. It was not a regular-season game anymore. It was an NBA final hyped event. The matchup to a heavyweight title fight, one bigger than media-driven controversy, in his first year, Yao Ming was a 7-foot-5 reality in the NBA. He became a factor. Now it had to be a personal thing for Shaquille O’Neal.

On the court, people expected Shaq to give his own personal welcome to Yao. It was Shaq’s first chance to duel the game’s next big man. The first NBA meeting between the present and the future of the center position was awfully fun to watch.

Yao and Shaq exchanged handshakes and a brief hug as they walked the court.

On the first possession of the game, O’Neal lowered his shoulder and took it at the rookie. But instead of punishing the rim, Yao altered the shot, he was credited with a block, and O’Neal missed badly. He injured his left index finger blocking a shot by O’Neal. Played tough and with skill in an impressive debut against his idol.

At the other end, Yao took a pass from the deep in the lane and knocked down a smooth hook shot over Shaq.

Yao consistently beat Shaq to his favorite spot on the floor. He was able to take the ball out of Shaq’s hands by forcing him outside the paint.

Much of the same followed for the next minutes, Two more blocks against Shaq, and Yao knocked down a 10-foot turnaround and beat O’Neal down for a layup.

Yao had his game flowing. Six minutes to the game, Yao definitely had an edge with 6 points to Shaq’s zero. But that didn’t last too long. Yao made three of his first four shots but missed his next seven.

As a return, angry Shaq made Yao to pay a price, getting roughed up while trying to block one of O’Neal’s dunks. Because Shaq established a deep position in the post, famously known with power moves and wearing opponents, A huge dunk, turnaround bank shot, by the first quarter ended, Lakers were in control.

But Lakers decided to go away from Shaq when he returned the game in the 2nd quarter. Neither Yao or Shaq did much heading into halftime. Shaq had his 11 first-half points, Yao with 6.

Yao continued to struggle against Shaq, couldn’t gain a firm position on offense, and that hurt the Rockets. Yao wasn’t able to move Shaq outside, and Shaq was mobile enough to disrupt Houston’s half-court tactics.

But also he bruised O’Neal into the paint for a fadeaway, and next time Shaq got the ball, he was called for an offensive foul for banging into Yao.

Yao may not have been scoring, but he did little things to help Rockets surge into the lead after three quarters. Yao limited Shaq to two points and two rebounds as the Rockets took a 71-69 lead.

Yao wouldn’t score again until late in the 4th period, but he remained as a factor. All of his rebounds came after half time, and most of his six blocks came against Shaq.

In the 4th quarter, O’Neal got rolling and scored a couple of baskets over backup center Kelvin Cato, Yao returned with nearly 8 minutes remaining and the score tied 77-77.

Shaq hit a difficult turnaround shot from the baseline over Yao to give Lakers a two-point lead.

But Yao set a great screen that opened Steve Francis for a game-tying 3 pointer to send the game over time.

Shaq nearly gave the Lakers win at the end of regulation, but his putback came just after the final buzzer. He scored 10 in overtime, including a vicious dunk over Yao, but several suspect calls played a major part in the outcome. He delivered two statement dunks, one tough reverse bank shot to keep Lakers close.

A questionable flagrant foul Shaq against Steve Francis, who scored 44 in the same night, and technical against Phil Jackson, helped Rockets push out to a 102-98 lead heading into the final minute.

Yao Ming blocked Shaq’s first three shots, altered Kobe Bryant’s attempt at the end of the regulation, and dunked with 10.2 seconds left in overtime for the biggest basket of the night. Battle of the giants lived up to the hype.

O’Neal had his best low post-fight since Alonzo Mourning when he was healthy.

Yao Ming, one of the few people in the world who can look down at Shaq, didn’t win the statistical battle, but Rockets’ rookie did win his respect, and his team won the battle.

After a slow start, O’Neal finished with 31 points and 13 rebounds. Yao, eight years younger and four inches taller than him, grabbed ten boards and scored ten boards, including an uncontested dunk with 10.2 seconds left.

But before all of that, in June 2002, an interview was played on tv. Apparently, Shaq was mocking the Chinese language. He was asked that Yao was coming for him, and Shaq got mad, “Alright, let’s see, okay..”

He joked in a very American way, remember all those Kung Fu movies? When English Voice Overs were not in sync? People joked about it all the time.

At times, Shaq tries to be a comedian. Sometimes he says good jokes, some times bad. He apologized to Yao and Chinese people after that incident.

Lakers, in the meantime, had received several phone calls regarding Shaq’s words about Yao. O’Neal insisted that his reference to Yao was intended as a joke, not a putdown.

“To say I’m racist against Asians is crazy, It’s probably someone trying to start trouble, I’m an idiot prankster.”

And Yao took it like it was nothing; he was Shaq’s biggest fan, “I believe he was joking with what he said.”

Years later, Shaq signed a sneaker deal with Li Ning, a Chinese company, and he visits China almost every year, has business deals.

Yao and Shaq got to know each other, Yao could speak English and even make jokes, when a reporter asked about Shaq being fat, “I think he has a lot of meat, on his elbows.”

There was no animosity. Shaq even congratulated Yao when he overtook him in 2003 All-Star balloting. Told Chinese media “Dui boochee” in Mandarin, “I’m sorry.” for his Kung fu joke.

Shaq had been dunking over NBA centers for more than a decade, and he would try to make a statement against Yao Ming. He didn’t have to outscore and outdo Yao to solidify his position in the game. Everybody knew who Shaq was, America, to Africa to China.

But between October 2002 and January 2003, Yao Ming made big strides, in half a season. Yao never expected to be successful by NBA players, coaches, owners when he came in. Let’s break it down Yao’s journey until facing Shaq for the first time, chronologically.

Yao, with such obvious gifts, intangibles, hard worker, quick learner, and a wonderful feel for the game, was already compared to all-time greats like Divac and Sabonis.

Shaq, perhaps the best center of his last 20 years, has measured himself against the best of his era, Hakeem Olajuwon, David Robinson, Patrick Ewing, and Alonzo Mourning. Yao’s only test in an age of power forwards pretending as centers was O’Neal.

Judging by his size, 7-foot-6, and 296 pounds, Yao was the only player who was suited to challenge Shaq. O’Neal and Yao could’ve met two months ago at Stapes, if not for Shaq’s surgically repaired big toe, which kept him in street clothes.

After their battle, Shaq praised his game, “He has all the tools, he can shoot, dribble, he can play, he’s no slouch, he shall be the Man in a few years to come.”

Yao Ming even sent a Christmas card to Shaq in December 2002, and he invited him to his house. By all appearances, Shaq’s relationship with Yao was growing.

Shaq’s father late Philipp Harrison drove all night from Florida to attend Shaq and Yao’s first game against each other. He arrived Houston and Rocket’s practice later that morning, and he presented Yao Christmas Card, Yao autographed it.

Shaq said, “Let me tell you something, Yao is my brother. I’m his brother. Period.”

Once opponents, now friends, sharing the same basketball hall of fame class, and mutual respect absolutely there. My favorite Shaq and Yao moment is not a basketball moment. It is when Shaq helped Yao wear his Hall of Fame jacket.

There will never be another Shaq, and apparently, no other 7-foot-5 super-skilled center like Yao Ming either.