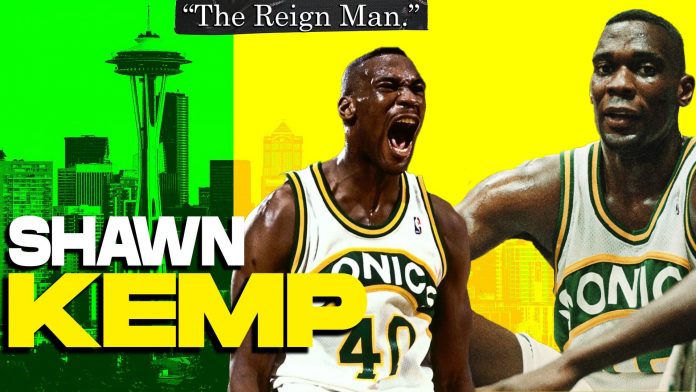 Remember Shawn Kemp being a massive force, splitting defenders to launch his shot? No one could stop Reign Man on a fast break run. So Warriors tried double-teaming him every time, and he gave the ball up for an open man.

When Kemp passed the ball, most of the time, it was to Gary Payton, and the Glove would give the best pass possible. It’s the 1992 Playoffs series between Seattle Supersonics and Golden State Warriors. The Series was mostly Kemp’s show. The Warriors couldn’t stop him. Because since his draft in 1989, he had gone from an occasionally motivated man-child to the lead horse on a sleigh ride. And Dunking was the signature play. Kemp, only 22 years old, but in his third season, he was the main reason for Seattle’s success over Golden State. His power was punishing the Warriors.

How about Shawn Kemp’s revenge from Alton Lister and Chris Gatling? Now it was the time. It happened at the time of his official notice of arrival to the NBA superstardom scene.

Kemp was beyond the top of the key when he decided not to try it but to do it. With three giant steps, he charged into a seam, between Billy Owens and Chris Mullin. In the lane, he rose, cupping the ball and swinging it widely, like a hammer. After seeming to scale the 7-foot Alton Lister, who was directly underneath the basket and thus could not legally draw a charge, Kemp slammed the ball. And Lister went flying to the floor; Kemp pointed his finger in his face.

Kemp became the Michael Jordan of the west. What are phenomenal plays for everyone else had become just another day at the office for Shawn Kemp. He could come from all angles; he was laying the groundwork for superstardom.

And now for revenge play on Chris Gatling, for the handshake.

With 32.8 seconds left in the first half, Kemp outmuscled him for an offensive rebound. Both took flight, and Kemp rammed the ball through the hoop and drew a foul. Back down to the floor, Kemp stuck out his mug and glared. Gatling responded the only way he could, under the circumstances. He shook Kemp’s hand; he said, “Nice play.” All the things considered, it was about the highest compliment the Warriors could pay to the opponent player.

And this is how Shawn Kemp, the Reign Man legend born. This was the story behind the Lister Blister dunk and the Chris Gatling handshake.