Home NBA Six Hall Of Famers On Basketball Court For The Last Time In... 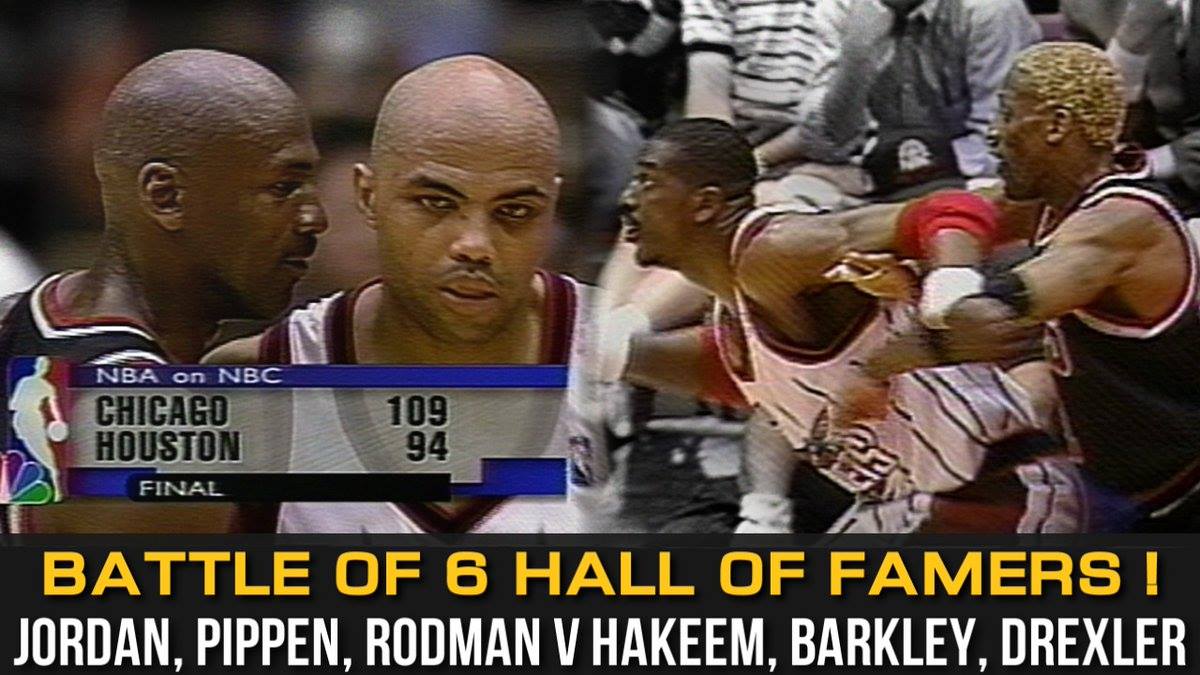 April 5, 1998: Very last meeting of these all time great hoopers. Michael Jordan, Scottie Pippen and Dennis Rodman was against Charles Barkley, Hakeem Olajuwon and Clyde Drexler. Their average age was 35 at that time. Probably the last time us NBA fans saw six unique, original characters of the game. They were like movie stars on the court. True pioneers.

Not more than a year later, Pippen was teaming up Olajuwon and Barkley for the lockout shortened 1998/1999 NBA season. Michael Jordan and Clyde Drexler was retiring, Dennis Rodman after weeks of drama was joining Shaquille O’Neal and Kobe Bryant in Lakers uniform.

Bulls are clearly dominated Rockets at this game. Charles Barkley was coming off the bench. Olajuwon was not healthy since 1996 season’s heart problems. Drexler was 36 years old. Even being oldest person on the court Dennis Rodman (age 37) and his teammates Pippen and Jordan were holding strong. Played 3 months more to win the 6th title in Chicago. They were old but healty mentally enough to win their last NBA championship.

Jordan vs. Olajuwon was a close call. That was what us basketball fans wanted for years. Both drafted in 1984 as 1st and 3rd pick. Even they had a possibility to play in same team, in Houston in 1984 if Rod Thorn was OK for the trade.

When Michael retired and started to play baseball in minor leagues. Rockets were winning back-to-back NBA titles. Olajuwon winning finals MVPs and league MVP. Rockets had a deep team surrounded by good shooters and veterans. When Hakeem got double teamed, Vernon Maxwell, Kenny Smith were hitting threes. Robert Horry was young and athletic. Clyde Drexler was providing a veteran superstar help. David Robinson, Patrick Ewing or Shaquille O’Neal doesn’t matter. Dream was destroying one and other both on regular and post-season between 1994 and 1995.

Both players were best at their position and played similar, nearly identical games. Incredible footwork mixing up with post up plays, cat like behaviour on the court just like a beautiful rhytmic classical music. Even their defensive mindsets were similar, both praised their defenses.

And April 5 1998 was the last time we saw Jordan and Olajuwon playing against each other originally for the Chicago Bulls and Houston Rockets.

A special trip down to the memory lane of an avid basketball fan. CRT screen television era, NBA on NBC theme and 6 giants of the basketball game are on the court for the last time.