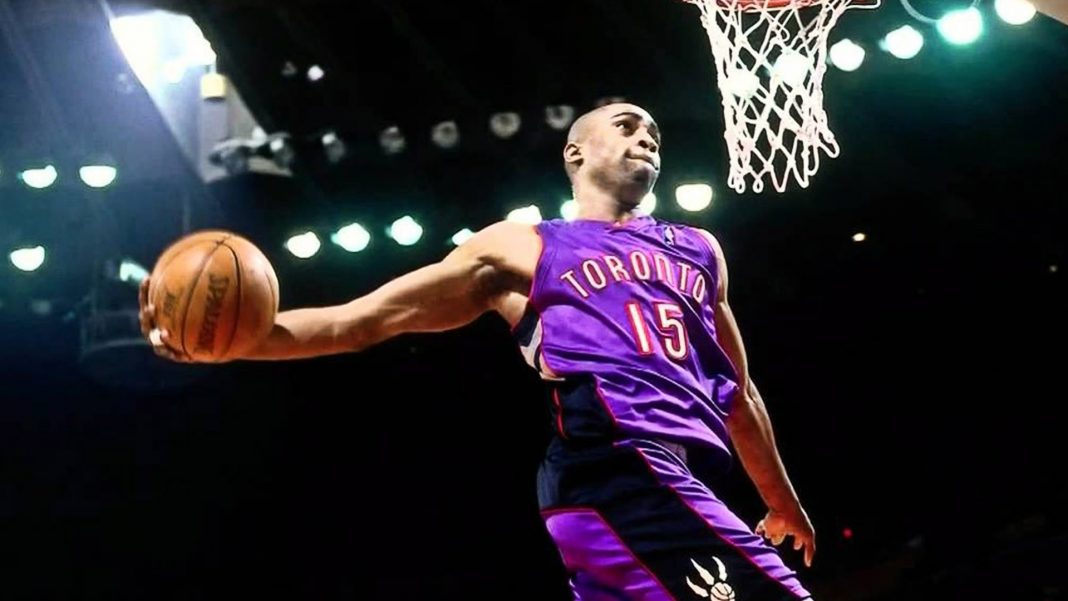 February 12, 2000, was the date of Vince Carter—the leading vote-getter in his first All-Star game—taking his next step approaching superstardom, rising through the air to dunk a basketball in the Slam Dunk Contest.

Before the event, his exceptional leaping ability and spectacular dunks brought him wide-spread popularity already. However, this was his first national TV (NBA On NBC) appearance.

2000 Slam Dunk Contest was the rebirth of the famous event which put on ice in 1998. The last winner was no other than rookie Kobe Bryant in Cleveland, 1997.

The 23-year-old phenomenon became league’s best player Shaquille O’Neal’s favorite, “My favorite player. Half-man, half-amazing.” From China to States, in one and a half seasons, he became the most famous NBA player in the world.

Shaq & Kevin Garnett were ready to record all Vince Carter dunks. But Carter had nothing scripted for the contest. (Shaq later recalled that he lost the videotape. Garnett still keeps his version of recording)

“I don’t want to plan them. I’ll just go according to how I’m feeling at that time. I don’t feel I have to do anything extra. It’s five dunks, and I’ll do five dunks that I have in my repertoire. If it wins, it wins. If not, I’m sorry I let everybody down, but I’m here to enjoy it and have fun.”

There was also a rule-change this time. Each dunker had a teammate assisting on at least one of their dunks in each of the two rounds. That’s were Tracy McGrady kicked in—Vince Carter’s cousin, and they stayed in the same crib in Toronto—T-Mac knew the winner days before because he witnessed all the dunks during Raptors practices.

“It’s unbelievable. It hasn’t sunk in yet. I’m having trouble. I just remember back in the days when me and my friends used to tape the dunk contests and watch them over and over.”

Vince Carter gave Canada “a hope” that night. He made the country a more attractive destination for other players. Five years since the NBA expanded into Toronto and Vancouver, the most popular NBA player was playing in Canada. NBA had a hangover from Michael Jordan’s retirement, and Vince came at the right time.

The entire All-Star event in Oakland was the coming-out party for the new generation that’s finally arrived. Vince Carter was just one of the nine players who would be making their All-Star debuts. The list included scoring champ, Allen Iverson.

Vince Carter Retires from the NBA