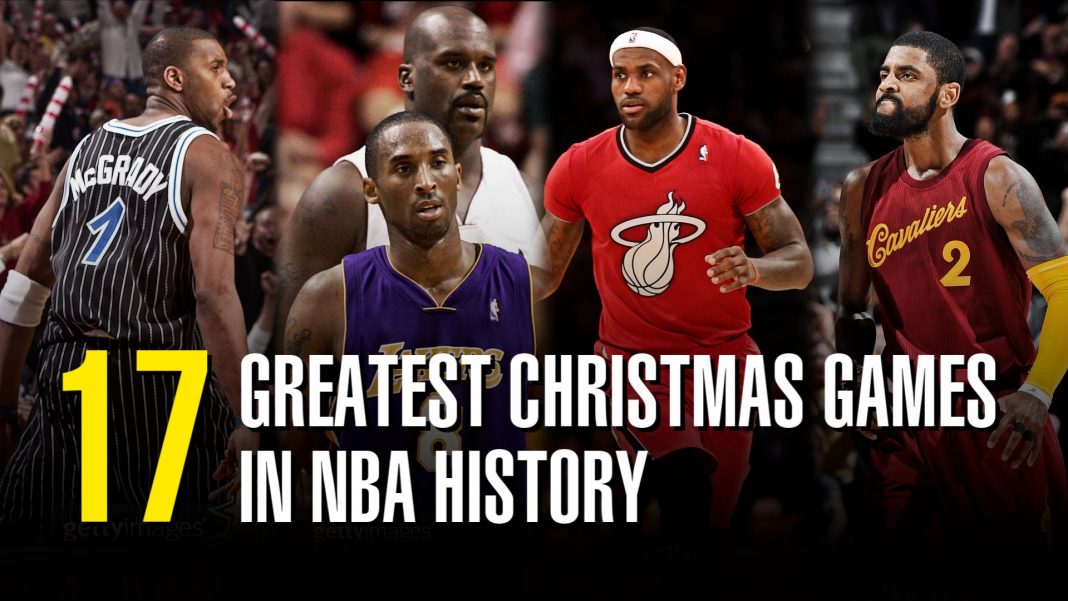 Christmas Games are the best time of the year. Besides All-Star weekend and the postseason games in April, May, and June, is there a better-televised basketball event than Christmas Night Games? NBA on NBC theme or NBA on CBS theme playing in the background. You lay on the couch with the entire family and watch Julius Erving, Michael Jordan, Patrick Ewing, Kobe Bryant, Shaquille O’Neal, LeBron James, Dwyane Wade, Tracy McGrady to play Christmas Game basketball. And they always had their best games on the 25th of December.

Here are the 17 greatest Christmas Games in NBA History. Let’s see how much you remember about these gems:

The game Dr. J, Henry Bibby, ”Jellybean” Bryant and Doug Collins took the floor against Earl ”The Pearl”, Bob McAdoo and the Knicks. Doc had a dunking clinic (4 dunks) at the Mecca. McAdoo and Dr. J had their duel and 76ers beat Knicks 109-94. Doc’s poster dunk over Jim Cleamons was just unbelievable.

At those years, Nets and Knicks were battling almost every Christmas Night. But this game was different because Bernard King who was arguably the best scorer of the league at that time went crazy and scored 60 points against his ex-team New Jersey Nets. TBS had Bill Russell and Rick Barry as the color commentators. Bernard’s heroics were not enough as the Nets came away with a 120-114 victory.

It’s 1985. Knicks lost Bernard King after his tragic injury at Sacramento but they successfully landed Patrick Ewing as the 1st pick. Larry Bird at top of his game and he’s about to win the league MVP award 3 years in a row. In this crazy double-overtime battle, the rookie Patrick Ewing brought the Knicks back against the Boston Celtics 113-104.

December 1986, Michael Jordan’s first injury-free season. He does a dunking clinic by posterizing Chris McNealy and Patrick Ewing. Don’t forget two of his extra airwalk dunks. But Patrick Ewing steals the game with a game-winner shot. It was a battle, Ewing got the last-second bucket to fall as the Knicks beat the MJ and the Bulls 86-85.

What was more exciting and enigmatic than Chicago Bulls and Detroit Pistons matchups in the late 1980s and early 1990s? Jordan and Pippen against Isiah, Dumars and the entire Bad Boys squad. The game was a Jordan show who finished with 37 points. Later that season Bulls swept Pistons in Conference Finals and won their first NBA title in 1991. It was the first year of NBA’s partnership with NBC. Bob Costas and Pat Riley as the color commentators. The whole event was not regretting for sure. Bulls beat Pistons 98-86.

1992 was the year of Bulls versus Knicks rivalry emergence. Pat Riley and Knicks copied Bad Boy Pistons defensive tactics and build a powerful squad that had a motto of “no easy baskets”. But it was not enough to stop Michael Jordan. 42 points with a fadeaway jump shot clinic. Bull beat Knicks 89-77.

Knicks were so happy between 1993 and 1995 because they felt that they can easily beat Chicago Bulls during that period. Scottie Pippen is playing on Christmas Day without Michael Jordan and he carries the Bulls 36 points and 16 boards double-double. Toni Kukoc plays angry mode and posterizes Knicks’ defense. NBA on NBC theme gives you the chills. Bulls beat Knicks 107-104

The first game after the 1995 Finals matchup. Shaq was waiting for this game to play against Hakeem Olajuwon. Their pay per view 1-on-1 event was already canceled so it was the time. But Olajuwon outscored Shaq 30 to 22. During that period, it was always who’s the better center? Shaq or Hakeem. And the game was so hyped. Magic beat Rockets 92-90.

Spurs were the NBA champions from the lockout-shortened 1998/1999 season. Lakers were getting swept over and over but this time, their head coach was Phil Jackson. Shaq was on his MVP run. Kobe was emerging as the league’s best or top 3 players at that young age. And Kobe’s incredible poster dunk was the exclamation point about who’d be the NBA champion of 2000 season. Lakers beat Spurs 99-93.

Tracy McGrady’s first year with Orlando Magic. He suddenly becomes a superstar in the league during Grant Hill’s tragic absence. After leaving Toronto in the summer of 2000, he instantly became a TOP 3 player in the league. And he always had the best Christmas Game performances. 43 points against NBA Finalists Indiana Pacers. Pacers won 103-93

Already hyped after 2001 Finals matchup between Shaq and Kobe’s Lakers and the 2001 league MVP Allen Iverson’s 76ers. NBA on NBC’s last year with the NBA. It was Kobe against AI. With Shaq on the injured list and Kobe struggling, Lakers received significant contributions from others in rallying from a 13-point deficit in the fourth quarter for an 88-82 victory over the Philadelphia 76ers in a rematch of the 2001 NBA Finals.

Another T-Mac Christmas Game gem. 46 points against an incredible defensive team Detroit Pistons. In 2002-2003 season, Tracy McGrady was the best scorer, best one on one player in the league. His movements were so smooth. Pure basketball skills, plus his size and athleticism. He was a perfect basketball player, and he deserved a better career. Magic beat Pistons 104-99.

If only Tracy McGrady could’ve stayed healthy. Prime T-Mac outscores rookie LeBron James 41 to 34. NBA on ESPN covers the event and one of the most exciting Christmas Games ever. The game went overtime and Juwan Howard scored consecutive points from McGrady’s playmaking passes. Magic beat Cavs 113-101.

This is probably one of the most-watched Christmas Games ever. Shaquille O’Neal’s first game back in Los Angeles and the first game against Kobe Bryant. During the team captains’ meeting, Shaq refused to meet and shake hands with Kobe. It was the most expected Christmas Day NBA Game of all-times. Kobe vs. Shaq with all the beef and the drama built around, it had a similar hype to Ali vs. Frazier I in 1971.

Every time Kobe drove to the basket, Shaq fouled him hard and his motto was: “No layups, no dunks.”. Both played an amazing game. Kobe shot some ridiculous baskets and O’Neal dominated the paint. Shaq ended up fouling out in the fourth quarter and the game went to the overtime. Kobe scored 0 points in the O.T. and missed the game-winner shot. Later Shaq said in the post-game interview: “I Knew That It Wasn’t Gonna’ Go In.”. Heat beat Lakers 104-102.

NBA had a lockout season after a crisis in summer 2011. And this was the first game after the lockout. Kobe Bryant scores 28 points, 7 rebounds, and 6 assists while the MVP Derrick Rose with 22 points and the game winners shot in Los Angeles. Derrick Rose demands the ball instead of just giving it to the rookie Jimmy Butler and going to the corner to make the game-winning shot. Bulls beat Lakers 88-87.

Kobe Bryant was still recovering from his dramatic injury and Wade and Bron figured out with back to back winning 2 NBA Championships. They were having so much fun on the court with all these crazy alley-oop passes and slam dunks. Heat beat Lakers 101-95. What makes Christmas games better than when 3 hall of famer players on the basketball court.

Now that’s an epic Christmas Day game. NBA Finals rematch between Cleveland Cavaliers and Golden State Warriors. Kevin Durant was added to Warriors squad and they were looking like ‘The Avengers’ to beat LeBron James and his company. Old man Richard Jefferson dunking over people. Kyrie Irving repeats his killer game-clinching jump shot over Klay Thompson. The last 2 minutes of the game were incredible. It was the first time a Christmas Day game looked like an NBA Finals game. Cavs beat Warriors 109-108.