Home NBA The First LeBron James versus Carmelo Anthony Matchup In The NBA: A... 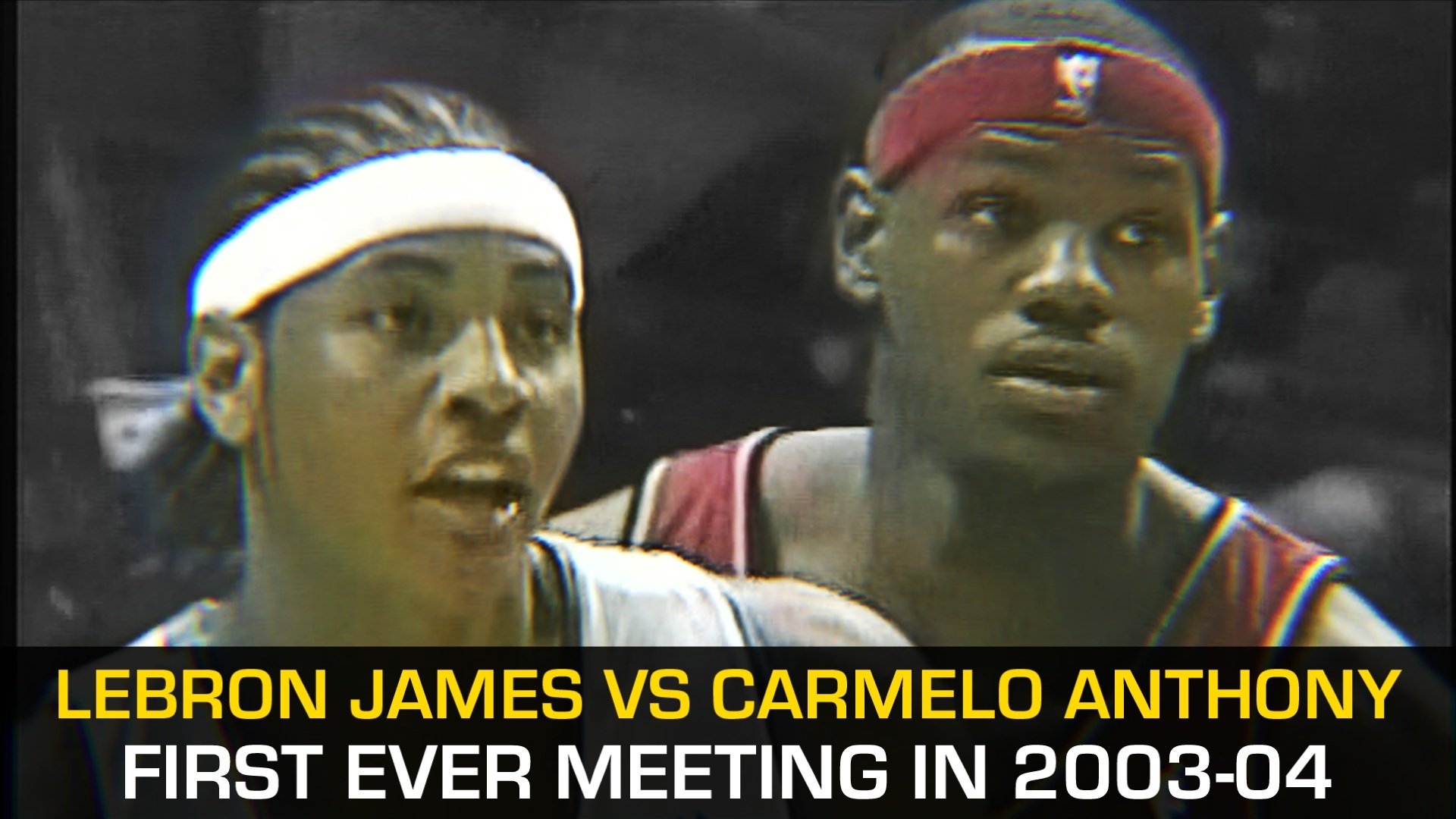 LeBron James and Carmelo Anthony’s 1st game of 38 against each other. Both having an off night but the game itself was so hyped. Jay-Z was at courtside comparing both Bron and Melo to ESPN’s Stuart Scott (R.I.P.), “Carmelo is more under control type player but LeBron has everything in the package.”

Also, both of their mothers were at the game. LBJ arrived in style at Gund Arena, wearing a white suit for his much-anticipated matchup with Melo, who led Syracuse to the national title this year. The two exchanged greetings before the nationally televised matchup of two of the league’s top young talents, which drew celebrities such as rapper Jay-Z and Cincinnati Reds outfielder Ken Griffey, Jr.

Carmelo was feeling himself under pressure while LeBron was calm and showcasing that everything is under his control. That year Melo was an NCAA champion but compared to LeBron a lot and people telling him that Bron kid is really good but he was saying that: “He’s not even played college ball. Why you guys comparing us to each other?”

This was LeBron’s first home game. Despite he didn’t shot the ball well, he pulled game-high 11 rebounds, dished 7 assists and did 3 blocks (one for Melo) alongside 3 slam dunks.

The first @kingjames vs. @carmeloanthony matchup. Jay Z at the courtside interview and both mothers of Bron and Melo's watching the game. There was a huge hype between these two that created by the media. From that point on, they played against each other 38 times. #Oldskoolbball

Until Carmelo Anthony loses his hopes to win an NBA championship with a basketball team that he’s leading, there were some debates for who’s better. LeBron or Melo?

It’s over now. Melo is a scorer but other qualities are favor to LeBron James. And being a good scorer does not out-qualify LeBron as the scorer. Even his worst days, LBJ was averaging more points and he’s aiming the most scored points in the NBA record which held by Kareem Abdul-Jabbar. Except for high post and isolation plays, LeBron James is a far superior player than Carmelo Anthony both at their bests.

This @kingjames vs. @carmeloanthony sequel was better than the 1st meeting of the rookies. — Melo scores 20 points in 2nd half with the total of 26. LeBron with all-around game and finishing with 19 points. Their first meeting was rusty but this one had some serious battle, especially in 1st and 3rd quarters. — The biggest LeBron James fan of today Shannon Sharpe was in attendance and he was wearing a Carmelo Anthony jersey. Sharpe was sitting alongside his Denver Broncos teammate Clinton Portis. — #Oldskoolbball

Only Melo knows what the future holds for him. Maybe we can see him as a role player, maybe he can adapt himself at last and accept that he’s not a number one option no more and chase an NBA championship to capitalize his Hall of Famer career. Olympic Melo is a legend but regular season Melo has faded away since 2016. Best of luck to him!