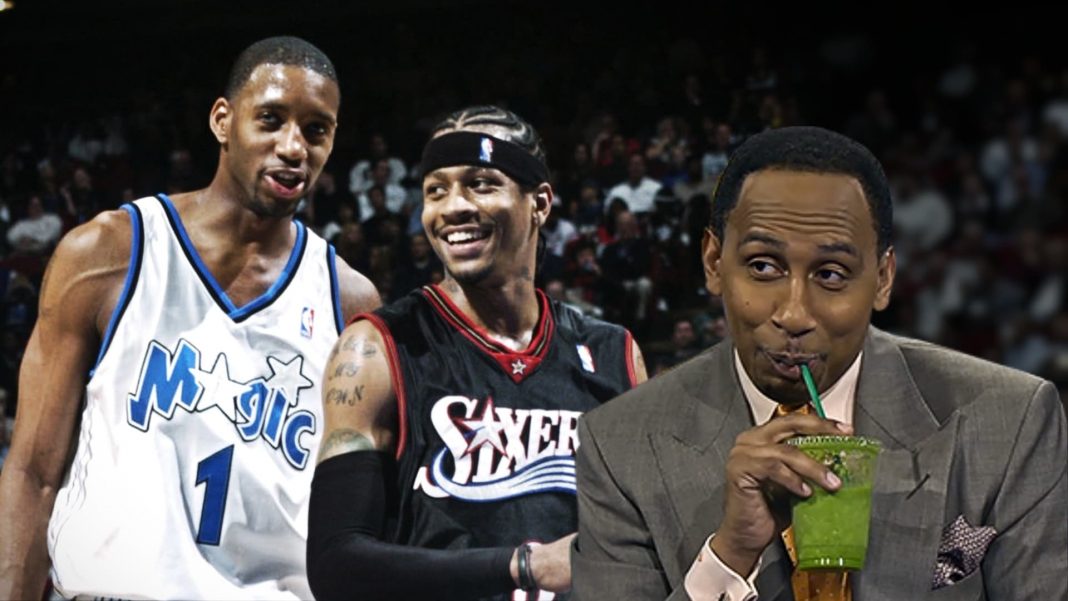 The year is 1999, and the NBA is transitioning to a post-Jordan driven league. What a way to start it up than to have the league be in a shortened lockout season. Many new faces for the Association, which team would be the one to take over as the face of the league since the Bulls were dismantled?

As we all know, it was the San Antonio Spurs who came away with the hardware, Duncan and Robinson led the way and paved the Spurs Dynasty of the 2000s. But one team had a chance to make a league shifting blockbuster move that might have altered the course of NBA history.

The Philadelphia 76ers were moments away from sending Larry Hughes to Toronto for Tracy McGrady and a first-round pick. The Deal was in place, and everything was all set to go. The Sixers were going to acquire – a rising star, high-school phenome, athletically gifted, skilled scorer to go along with Allen Iverson – McGrady at the time was playing the shooting guard and the small forward position and would fit right beside Iverson as a much-needed scoring threat.

Not to mention the Sixers were going to receive a first-round pick! What a steal this would have been. It wasn’t like the Sixers were in the wrong place either, Allen Iverson was coming off his first of four NBA scoring titles and was on the rise to superstardom. The Philadelphia 76ers finished the ’99 lockout season as the 4th seed, losing in the second round to the Indiana Pacers in a series sweep.

Unlike the Raptors who did not even finish with a .500 record, let alone qualify for post-season play. The deal would have been a move for the ages. If McGrady stayed in Philly and signed a long-term extension, were talking at least four seasons with a Peak T-Mac and a Prime Iverson. Whoa.

T-Mac and Iverson: The Original KD and Curry

In their peak’s, they were the original Steph Curry and KD. With T-Mac, the resemblance to Durant is there, from his frame (6’9”, long-armed, athletic) to his overall skill set (Can score at all three levels, shoot, handle, pass, and defend when needed). Iverson was the original Steph Curry, and I am not talking about the 3-point shot at all, clearly, Curry is the greatest shooter we have ever seen. But I am talking about his overall impact on the game, a small-framed guard who had even the biggest of defenders shaking in their boots. Iverson’s ability to pick apart a team defense from scoring to an electrifying handle the way Steph does is truly comparable. Put those two together, and the Sixers would have had the 2000’s version of the 2017 Warriors duo. Now, I am not saying this duo was guaranteed to win a title, but I would put any amount of money down that the Sixers would have had more than one finals appearance during the Shaq-Kobe and Spurs Era of the early to mid-2000s.

As I mentioned earlier, the deal was drawn up and agreed upon. Yet it seemed too good to be true because it was. A sports reporter for the Philadelphia Inquirer by the name of Stephen A. Smith was one of the first to break the news that trade was going down.

In a recent tweet, Smith confirmed that this was the 100% truth. He retweeted the post and commented, “Yes, this is true” After the story broke, 24 hours later, the Raptors had “cold feet” backing away from the deal. What a buzz-kill! Especially for a player like Iverson who ended up taking on the ’01 Lakers essentially one on five (respectively) Countless people around the league and the basketball world blame Stephen A. for the trade falling through, at the end of the day Smith was just doing his job as a diligent reporter.

What would the league have been if these two united, who knows? Yet, these are the scenarios that keep the world wondering. Let us know what you think about how the duo of McGrady and Iverson would have faired!

Gone Fishin’: How One Comment by T-Mac Lead to a Catastrophe